Jakarta. Senayan is a happening area in Jakarta, with many local and international concerts, football and other sports games and exhibitions held in the area, resulting in endless traffic congestion.

But the area is going to be even busier this week. Standing in the grounds of mega-mall Senayan City, gargantuan boxy tents in 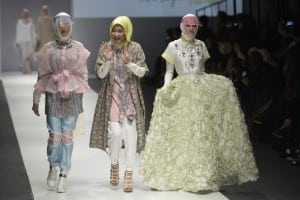 vibrant colors have been piquing the curiosity of shoppers. Pop music thumps from inside the tents as fashionistas scurry between them.

Indonesia’s fashion crowds will be celebrating the local industry during Jakarta Fashion Week 2016, hosted by Senayan City for the third year running.

JFW, organized by Azura Activation a subsidiary of the local media group Femina, has been held annually since 2008.

“Jakarta is Indonesia’s capital of fashion,” Svida Alisjahbana, chief executive of Femina and chairwoman of JFW 2016, said at the opening of the event on Saturday.

“And Jakarta Fashion Week has grown tremendously as a center of innovation and collaboration of the country’s fashion industry.”

Jakarta Governor Basuki Tjahaja Purnama and his wife, as well as ambassadors and other foreign dignitaries, attended the opening.

Cucu Ahmad Kurnia, head of Jakarta’s Tourism Office, was also pleased with what the event has on offer.

“JFW grows bigger and bigger each year,” Cucu said. “We believe the event helps to establish a positive image of Jakarta as a regional and international fashion destination. And we hope that the event will also benefit all the fashion stakeholders in Jakarta and Indonesia.”

Over the course of the seven-day event, over 70 fashion shows will showcase the 2016 collections of scores of designers to the world. More than 230 local designers and 19 international names, 250 models from Indonesia and abroad and 60 hairdressers and make-up artists will participate.

Department store giant Matahari will showcase its latest collections from local fashion brands, which will soon be available at the over 140 stores spanning 66 cities across Indonesia.

A special collaboration between JFW and Japan Fashion Week will be presented on Sunday night. In the special show, Indonesian designer Michelle Tjokrosaputro will show off her ready to wear line “Bateeq” alongside Japanese counterpart Suzuki Takayuki with his “Ikuna/Suzuki Takayuki” label.

Keeping an international theme, the British Council will host a talk focusing on sustainable fashion on Monday.

A screening of award winning documentary “The True Cost” by US filmmaker Andrew Morgan, will be hosted by the British Council on Tuesday morning at the 21 Cineplex at Senayan City. The film explores the ethical and economical dilemmas behind “fast fashion” while interviewing women working in sweatshops.

Thailand’s Ministry of Commerce will present the latest collections among its top designers on Tuesday afternoon, including Paul Direk and Tawanna Thara.

Direk will showcase his high-street collection for men and women, and Thara will present elegant cocktail and evening gowns for her pret-a-porter line “Thea by Thara.”

The Islamic Fashion Design Council, a leading international council for Islamic fashion, has, for the first time, teamed up with JFW heralding the welcoming of scores of new designers and newly opened markets.

IFDC will present a show featuring the 2016 collections from Amber Feroz of the United Arab Emirates and Tahir Sultan from Kuwait on Tuesday evening.

The Indonesia Fashion Designers Council (IPMI) will present the 2016 collections of some members on Wednesday afternoon, including the works of Carmanita, Danny Satriadi and Mel Ahyar.

“Next year, we’ll open a special store for them at the mall,” said Veri Y. Setiady, chief executive of Senayan City. “It’s proof of our commitment to the local fashion industry.”

A pop-up store, running for the whole week, features special collections from ready to wear labels “Kle,” “Danjyo Hiyoji” and “Hunting Fields” on the ground floor of Senayan City.

The Korean Cultural Center (KCC) will present a joint fashion show between Indonesian designer Patrick Owen and Korean counterpart Sujinn Kim on Friday. To encourage a cultural exchange between Korea and Indonesia, the two designers will create a special collection inspired by each other’s countries.

As customary each year, JFW will culminate on Friday night with the “Dewi Fashion Knights” closing show. The “Knights” are five of Indonesia’s best up-and-coming designers handpicked by editors of high-end fashion magazine Dewi, and other major fashion influencers.

This year, fashion designers Felicia Budi, Haryono Setiadi, Lulu Lutfi Labibi, Peggy Hartanto and senior jewelry designer, Rinaldy A. Yunardi have been selected. They will present their 2016 fashion collections in the show, themed “Eyes to the Future.”

All fashion shows, talk shows and film screenings at JFW 2016 are free-of-charge.