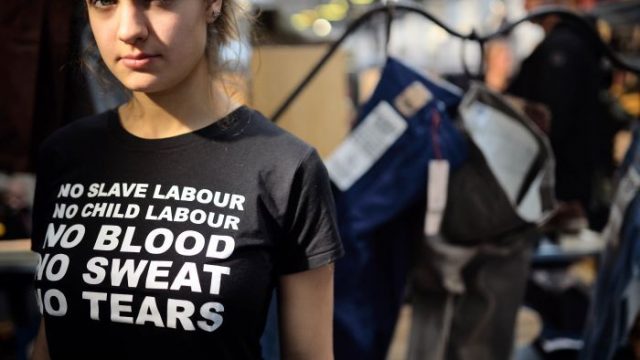 The concept of ethical fashion is now in vogue, but for the unaware, there are some myths that require immediate busting.

Australians are the second biggest consumers of textiles worldwide. We throw more than 500,000 tonnes of the stuff into landfill every day. We only wear our garments seven times before throwing them away and still buy an average of twenty seven kilograms of new clothing each year.

The ethical fashion movement promotes a cull of fast fashion’s massive social and environmental impact. But why aren’t more people engaging in it?

We spoke to Clara Vuletich about the five biggest myths of ethical fashion—and if they’re keeping people out.

1. Ethical fashion has to be exclusive

It used to be the case that shopping ethically meant visiting tiny, hole-in-the-wall boutiques, which were either aggressively minimalist or bursting with colours a Crayola pack would be shy to wear. But it’s becoming mainstream.

Vuletich says big brands like H&M and Country Road are engaging with the ethical space in ways unique to their breadth and industry relationships. Another brand, Uniqlo, has introduced a recycling drive for customers to return their secondhand clothes. Though these actions are often met with a sceptical “but it’s just PR” comment, Vuletich says they are a step in the right direction.

“The people who work in this space aren’t monsters,” she says. “They aren’t all ego-driven. It’s much more nuanced than that.” The relationship a big brand like H&M has developed over decades with their primary garment supplier in Shanghai (for example) isn’t insignificant. They know their names, their families, their lives.

2. Ethical fashion has to be vegan, natural and eco-friendly

Catch-all phrases like natural, eco-friendly, or yes, ethical, are usually a sign to look further, warns Vuletich. Cotton, one of the most prolific materials worldwide, almost always produces toxic effluent from pesticides and dyes, and relies on infamously exploitative farming environments.

According to Levi’s, one denim pair of jeans is made with 2,600 litres of water. Polyester, a synthetic material derived from plastic is far more easily recycled and reused than any other natural material.

But polyester can take up to 200 years to decompose. In landfill, wool creates methane gas. So which is better for the environment? The complexity of textile production makes it impossible to rank fabrics on a hierarchy of environmental sustainability.

3. Ethical fashion has to be local

Cutting down transport emissions does matter. But the fact is, unless we start growing cotton farms and erecting textile mills in our local communities, the creation of any piece of clothing will have some international process to it.

A “Made in Australia” tag won’t always be the guarantor of quality and safe working conditions. Neither does a “Made in China” tag mean poor workmanship and sweatshops (anymore).

For the quality, bulk, and turnaround the Australian fashion market wants, whether ethical or not, international processes are not an unfortunate by-product—they are crucial to its existence. Fabric manufacturing is one of the quickest ways for communities and countries to rise out of poverty and the solution isn’t to pull the rug out from under them.

4. Ethical fashion has to be expensive

If you’re looking for a new piece of clothing where every worker in the supply chain has been paid well, it stands to reason the final product will be expensive. If you don’t have money to burn, there are other clothing choices you can make that won’t exploit the earth and human race.

Vuletich is a big fan of secondhand shopping—think Salvos, Vinnies, U-Turn, Swop, Red Cross, Gumtree… Secondhand goods they may be, but that’s not a codeword for cheap, shoddy, or badly made. Instead of a fast fashion giant, your purchase funds a local charity, business, or market stall owner.

No extra resources were extracted for anyone to get that piece of clothing to you, nor was anyone enslaved to sew your new threads. It’s likely a local near the shop donated it, so transport emissions are low, and you’re also keeping something out of landfill.

Vuletich is wary of making huge claims. Slogans like ethical fashion will save the world are just that—slogans. The effectiveness of campaigns like the 1-for-1 business model have been thoroughly debunked, and it’s doubtful buying a pair of fair trade sandals will do as much good as a country changing their labour laws. But will it have some impact? She says yes.

For someone not in the industry, the complexity is overwhelming. Trying to track the supply chain of a polyester dress might take you to one factory in Turkey, while following the history of a pair of denim jeans will take you to China—if the clothing company even knows where their raw materials are sourced. The sheer scale of garment manufacturing is the main reason ethical fashion is intimidating, and that’s not taking into account consumer needs.

They might want it to be easy and careless. But with the growing social, political and environmental consciousness around fashion, it’s difficult to stay unaware. Maybe it won’t change the world, but rest assured that the choices you make as a consumer do add up.