By Sam Phillips – The Courier-Mail

HALAL certification and its place in the Australian grocery market is a consumer debate still cluttered by rumours and innuendo.

As a response to our readers’ many requests for hard facts on the matter, several major food companies, government agencies and industry leaders were contacted to get to the facts.

Among them were Coles, Vegemite, Fleurieu Milk and Yoghurt, the Australian Crime Commission, the CEO of Halal Australia, the AFGC, the Department of Agriculture and a director of one of Queensland’s largest meat processing companies.

Are costs incurred by businesses in certifying products as halal passed on to consumers in store?

Coles: “Many Australian suppliers prepare their products to Halal specification so that they can be made available to the widest possible range of customers and also exported to other markets outside of Australia.”

“By increasing their overall market, suppliers are able to reduce their costs of production, resulting in lower prices for Coles customers.”

James Mathews, AFGC: “The bigger the market, the less pressure there is on cost prices and it’s then a matter of supply and demand reducing prices, which makes it a win-win for everyone.”

Meat processing director: “If you can use the whole carcass you can pay the farmer more for each head and that then reduces the price for the Australian consumer.” 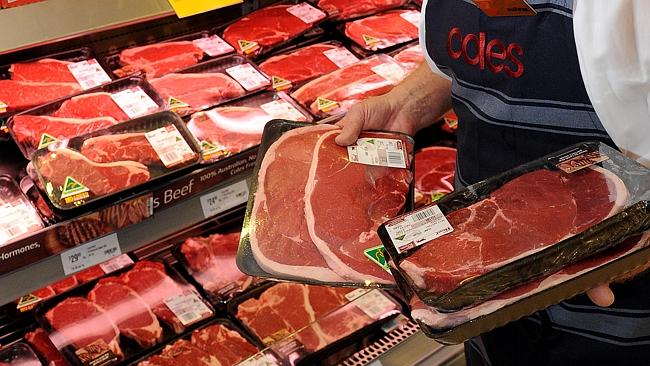 Coles says that by certifying their products as halal, they are able to increase their overall market and then reduce production costs. Picture: Peter Cronin

How much is certification costing businesses?

Meat processing director: “We pay 60 cents per head for our certification fee and when you start adding up the money we get for lung, liver and heart overseas, you’re looking at an extra $50 per head in revenue through halal certification.”

“It provides revenue to the Australian market by using the whole carcass and selling it overseas, you can’t give away lung here but it can be sold in Asian countries for a couple of dollars per kilo.

Nick Hutchinson, Fleurieu Milk and Yoghurt: “It costs us $1000 a year to be certified and it works out to cost an extra $0.002 per product per year, which is then just absorbed in house, nothing passed onto consumers at all.”

Where does the money raised by halal certification go?

Halal Australia: “The service fees paid to Halal Australia for halal certification and accreditation are used to maintain the normal costs of running a registered business in Australia.”

“These include overhead costs such as utilities, rent, inventory and supplies, and employee salaries, as well as income taxes paid to the Australian government.”

Dr Muhammad Khan, CEO, Halal Australia: “Any of your readers are more than welcome to not only read the FAQ’s on our website but also on the Australian Crime Commission’s but I will say this — we have absolutely nothing to do with terrorism.”

“99.9 per cent of Muslims are kind, loving people — we don’t condone any kind of violent activities anywhere in the world, it has nothing to do with Islam.” 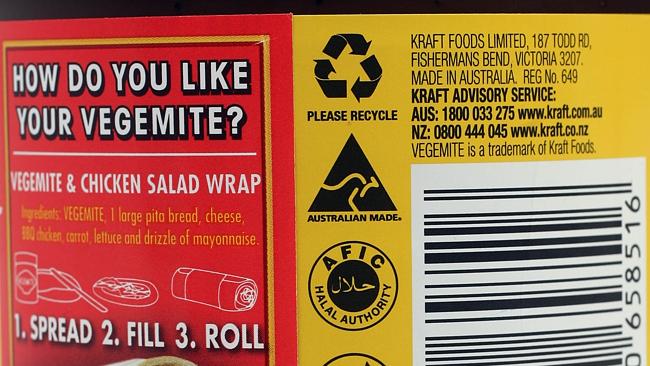 A spokesman from Vegemite says certifying their products as halal has not changed the way they’ve made their product, or the ingredients in it.

Why do products that are not edible require certification?

Coles: “We don’t require suppliers to provide Halal certification for products other than in specific ranges aimed at customers for who this is important.”

Dr Muhammad Khan, CEO, Halal Australia: “It’s not only edible products but pharmaceutical products and toiletries which can be use or applied on the skin, as it can contain some of the impurities from ingredients that are not halal.”

“All food products, processed food products or anything that may contain gelatine coming from pig skin needs to be certified.”

Does halal certification change the way companies make their product?

Vegemite: “For the record, we’re proud to make products to suit our diverse Australian population and export markets.”

“Certification doesn’t change the way we make our products or the ingredients in them.”

Coles: “We are advised by our suppliers that the Halal process does not significantly alter the way the product is manufactured or processed and does not affect the ingredients, quality or taste.

Is the certification really worth the benefit to the economy?

Nick Hutchinson, Fleurieu Milk and Yoghurt: “It’s a great thing for state and national economy, we have picked up economic benefit through the Emirates contract and there are other companies right across Australia who are putting millions of dollars back into the economy through being halal certified and exporting to countries like Indonesia.”

Department of Agriculture report: “In 2012-13, Indonesia (which has the world’s largest Muslim population) was the third-largest market for Australian food exports.”

James Mathews, AFGC: “The alternative is if you get rid of it, we’re completely losing our market — handing other companies the opportunity to pick up the overseas market.”