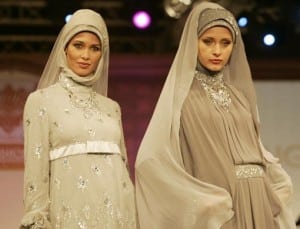 Combining fashion and modesty, an Australian exhibition will feature stylish Muslim women couture that applies to the needs of pious women needs, filling a void in the growing market of Islamic fashion.

The clothes I’ve designed are for women who like to follow fashion but want to feel comfortable they are easier for women to wear,” Dima Kattan, a fashion designer who will participate in Islamic fashion exhibition with her own label Dima G, told the Herald Sun on Thursday, September 26.

The Immigration Museum exhibition Faith, fashion, fashion: Muslim Women’s Style in Australia is scheduled to from October 10 to July 9. Held in a bid to fulfill the needs of Australian fashionable Muslim women, the exhibition aims to promote the ‘MODEST’ Muslim couture by featuring various works for Muslims fashion designers.

Many of these labels were founded by Muslim Women whose own experience of finding fashionable head scarves was either limited or non-existent and that led them to start designing and making their own clothes, Padmini Sebastian, Immigration Museum manager said.

Targeting different market segments, the exhibition will present both modern designs that fit both Muslims and non-Muslims. This includes a designer who creates high-end dresses inspired by pop star Rihanna, to the swimwear designer who created the one and only Burquini.”

The exhibition, which interweaves Islamic faith with modern fashion, was held for the first time in April, 2012.

Being in Australia for more than 25 years, Kattan, a Palestinian immigrant started to wear hijab eight years ago. “Before I started wearing the hijab, no-one could tell if I was Italian or Muslim but now people know straight away,” she said. “Every now and then someone might make a bad comment but I find most people are very friendly people in Australia understand.”

She added that the new trend of Islamic fashion has attracted non-Muslims across the country.

Recently, Kattan started her own label Dima G for the fashionista or, more appropriately, hijabista. She expressed great enthusiasm to participate in the upcoming exhibition. Muslims, who have been in Australia for more than 200 years, make up 1.7 percent of its 20-million population.

Islam is the country’s second largest religion after Christianity.