BRUNEI and Thailand pledged to embark on more concrete projects in halal food production after inking a Memorandum of Understanding (MoU) on Agricultural Cooperation yesterday. 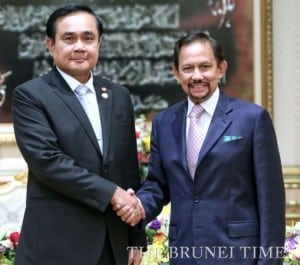 The prime minister is in the Sultanate for talks with His Majesty Sultan Haji Hassanal Bolkiah Mu’izzaddin Waddaulah, the Sultan and Yang Di-Pertuan of Brunei Darussalam.

“We are prepared for further exchanges in terms of marketing, the food industry… Thailand is also developing halal products and Brunei is already well-established in this area so the two countries can share information and knowledge,” he told media.

Yongyuth added that the MoU will cover a range of areas, including rice production, fisheries, livestock, land development and water management.

“His Majesty has Vision 2035 and food security is an important aspect of that… Thailand is ready to cooperate with Brunei to ensure this.”

The MoU will facilitate Thai experts to work closely with local rice farmers to boost harvests of locally-grown grains such as Laila. Brunei currently sources 90 per cent of its rice supply from Thailand, importing 40,000 tonnes annually.

The Sultanate set a rice self-sufficiency target of 60 per cent by 2015, but domestic production reached just 1,380 metric tonnes in 2014, equivalent to five per cent of domestic needs.

Both His Majesty and Prime Minister Prayut were present to witness the signing of the agriculture pact at Istana Nurul Iman yesterday.