A former experimental farm in Fredericton Junction will find new life as a private farm raising different kinds of livestock for meat.

The new owners from Ontario purchased the acreage of what was once the Atlantic Dairy and Forage Institute.

“We are planning to specialize in raising sheep, goats and rabbits,” wrote Lenzi Aziz. the new owner, in an email.

“Currently, we are seeking to obtain financing to build an abattoir that will be able to render cattle, sheep, goat and game serving the communities around us.”

Aziz, along with his wife Tarita and three of their four children, will operate the farm. The farm will be renamed Riverhaven Acres.

Tarita Aziz is from New Canaan and said coming back to her home province is fulfilling. 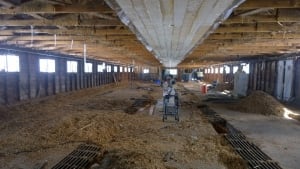 “Anywhere in New Brunswick is home, even though I’m not originally from this area it still feels like home. This is a dream come true.”

The couple is planning a storefront within the farm to offer farm fresh meat directly to customers who wish to visit the facility to see where their food comes from.

“Once we are up and running, we’re hoping to pair with the local schools as well as a hands-on experience,” said Tarita Aziz

“And not everyone knows that your food doesn’t just come from a shelf.”

The couple say they will be able to offer customers halal meat if they choose. They say with influx of Syrian refugees coming to Canada they know there is a demand for meat that is prepared as prescribed by Islamic law

“Our market shall and will be the traditional market,” wrote Lenzi Aziz.

“Of course, there is a big potential for the ethnic market. 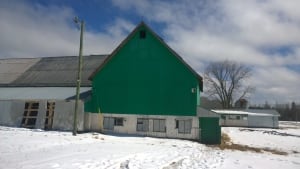 The new owners of Riverhaven Acres have hired back some of the former farmhands of the Atlantic Dairy and Forage Institute to help rebuild the farm. (Shane Fowler/CBC)

“While we are going to cater for the ethnic market because we believe it is a very important segment of the market, it is however an add-on, but not the core of our business plan.”

“We plan on making that available for the ethnic groups that have asking about it – concerned that they can’t have access to it the way they would like to,” said Tarita Aziz.

“But the emphasis is not that we are catering to just an ethnic group.”

The Azizes are hoping to have several dozen sheep and goats early this summer with the expectation of housing up to 600 animals once the farm has been rebuilt.

The new owners of the farm have already rehired some of the former farmhands to help with fixing up and renovating the facility.

After the Atlantic Forage and Dairy Institute suddenly closed last year, several people were left out of work. A public auction was held resulting a the farm being stripped of much of its piping and some electrical.

The farmhouse burned down in 2011, and the institute’s trailer labs were moved when the company sold. The Azizes have been relying on an onsite camper trailer while they rebuild.

“There’s no running water, and no plumbing yet,” said Tarita Aziz. “But the community has been so welcoming to us.

“We hope to build a house in the summer months.”