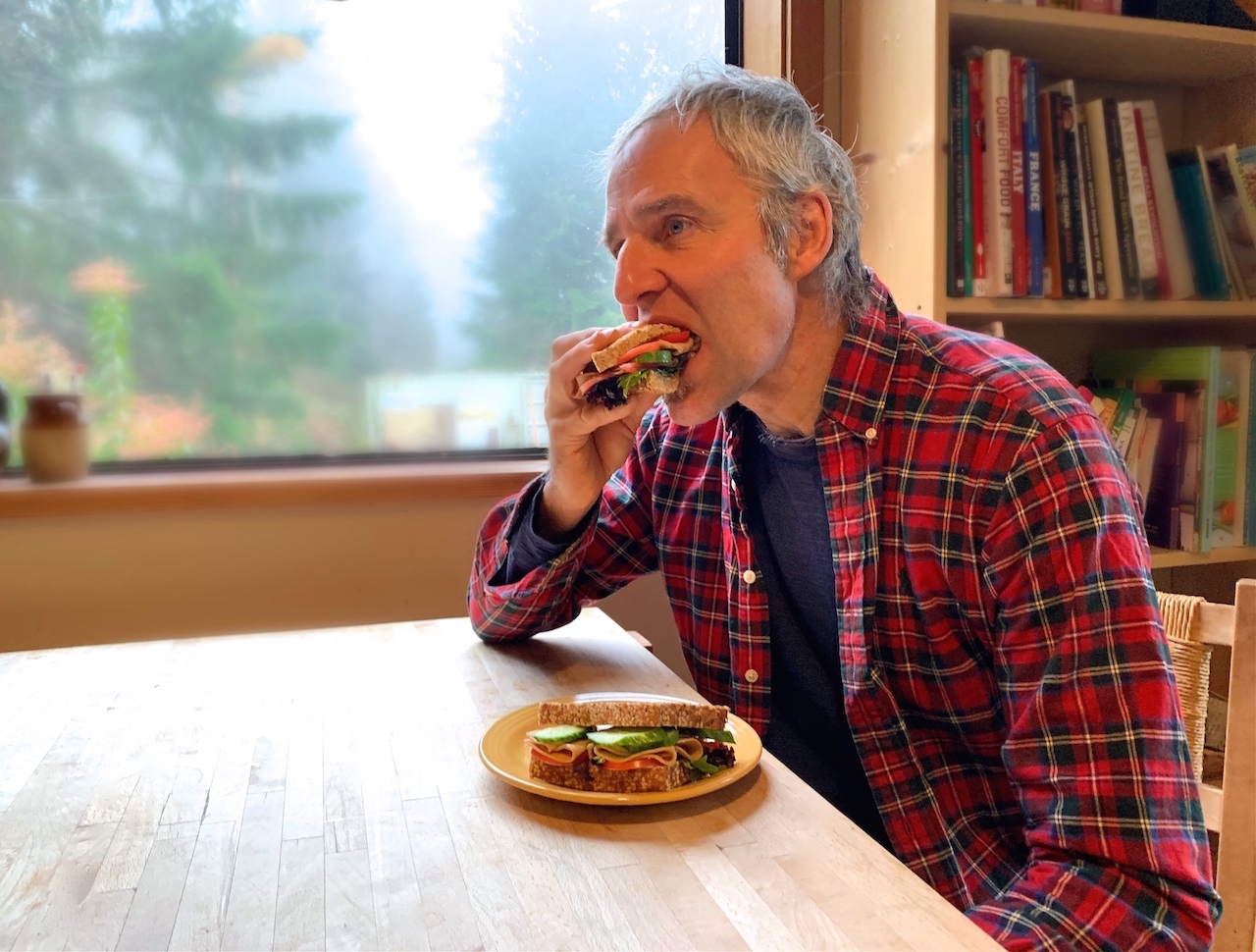 Johann Wieghardt trying out plant-based deli meats for the first time. “Better than I thought it would be. Would consider eating it if I was going to become vegetarian,” he said. Photo by Rochelle Baker

Sales of alternative, or plant-based, meats are booming worldwide. Driven by skyrocketing demand from consumers striving to cut back on meat and companies facing increasing pressure to reduce their environmental footprint, the market is anticipated to reach $23.1 billion by 2025.

And major meat companies have been racing to meet demand, with big players such as McDonald’s and Maple Leaf Foods recently launching a suite of plant-based meats.

Meat contributes up to eight billion tonnes of CO2 per year, roughly equivalent to the annual emissions of 1.6 billion cars, and according to the Intergovernmental Panel on Climate Change (IPCC), a global shift to diets that contain less meat is essential to keep global warming under the 1.5 C limit agreed to in the 2015 Paris Agreement.

“It’s well-known that eating lower down the food chain is more environmentally efficient,” said Navin Ramankutty, professor of global environmental change and food security at the University of British Columbia.

Those factors have fuelled a booming market in alternative proteins, meat- and dairy-like products that are usually manufactured from soy or pea protein, with about 10 per cent of Canadians saying they eat little or no meat, according to research by Dalhousie University’s Agri-Food Analytics Lab.

Companies in their infancy a decade ago, such as Beyond Meat, have become household names. Now, major meat companies have jumped in the fray.

For instance, in the past three years, Maple Leaf Foods has purchased two venerable alternative meat companies — Lightlife Foods and the Field Roast Grain Meat Co. — and announced plans to build a $401-million pea-protein processing plant in the U.S.

This year, the company launched a line of products made from a blend of plant and animal proteins, a “direct response to Canadians’ desire to eat sustainably,” said Michael McCain, Maple Leaf Foods’ CEO, in a written statement.

“That question of sustainability has be asked in a much wider context than just the production of these plant-based (meats),” says Élisabeth Abergel, professor of sociology and environmental studies at UQAM. #plantbased

In the first half of 2020 alone, more than $1.4 billion was invested in alternative protein companies. That’s more than twice the total amount spent last year, according to Coller Capital, an international private equity investment company. The organization regularly publishes an index evaluating social, environmental and governance risk factors for 60 major meat and protein companies as a guide for sustainability-minded investors.

The #FAIRRIndex is the only comprehensive assessment of the largest global animal protein companies on critical #environmental, #social and #governance issues. Explore the data to identify the #industryleaders who play a role in addressing #climatechange https://t.co/mzM4iagx7C pic.twitter.com/SVCMNOda17

“I don’t think (consumer demand) is going to go away … COVID may have stalled the momentum a little bit, but I am expecting the momentum to come back,” he said, citing Canadians’ concerns about the environment, their health and the ethical treatment of farm animals.

Even veganism, one of the more challenging plant-centric diets to follow, is on the rise, he noted, with about 600,000 Canadians saying they were vegans this year compared to 400,000 in 2019.

Still, some researchers say that despite the hype, plant-based meats might be less sustainable than they appear.

“That question of sustainability has to be asked in a much wider context than just the production of these plant-based (meats),” said Élisabeth Abergel, professor of sociology and environmental studies at the Université du Québec à Montréal.

Especially when it comes to evaluating industrially produced, plant-based proteins. Simply measuring the number of resources used to produce plant protein and comparing that against the number used to produce an equivalent volume of animal protein doesn’t give an accurate picture of the food’s overall impact, Abergel said.

Plant-based meats remain a small part of the major meat companies’ total production, she said. That makes it difficult for plant-based meats to significantly impact these companies’ environmental footprint without additional, supply-chain-wide changes to how they produce and distribute food.

For instance, only four per cent of Maple Leaf Foods’ sales revenue last year — about $176 million — came from plant-based products. However, the company has invested in a suite of initiatives to reduce its overall environmental footprint by 50 per cent (compared to 2014) by 2025.

Abergel said an environmentally conscientious consumer should also consider how the base ingredients for plant-based meats are produced.

“Certain companies use soy, other companies use pea protein. In (both cases), are these grown organically or are they grown in monocultures? Are they part of the same supply chain … used for feeding cattle?” she said.

“If the soy protein or the pea protein come from monocultures, and the soy is genetically modified, I think that sustainability measures have to take these into account.”

Industrial agriculture is associated with myriad environmental impacts, from nitrous oxide emissions tied to excessive fertilizer use to hurting pollinators through habitat destruction.

Not only that, the economic model that underpins both industrial agriculture and meat production is dominated by a handful of large processing and retail companies. As a result, farmers often have little choice but to sell their crops at an unsustainably low price that isn’t reflected in the prices paid by consumers, according to Cathy Holtslander, director of research and policy at the National Farmers Union.

Farm debt has risen exponentially in the past 20 years, more than doubling since 2000 to reach $115 billion this year. Meanwhile, Canadian farmers’ net incomes have steadily dropped, hovering around $10 billion annually since the mid-1980s, rates unseen since the Great Depression.

That has pushed many out of business — the number of farms in Canada dropped 25 per cent between 1991 and 2011 — and has made it more difficult for those who remain to innovate with more sustainable farming techniques, such as cover cropping to absorb excess nitrogen or interspersing pollinator habitats in their fields.

Abergel also pointed out that many large food processors have also seen other concerns in their supply chains, everything from working conditions to food safety. Those challenges speak to the need for a definition of food sustainability that is broader than just an environmental footprint, she said.

“If you’re somebody who is really concerned about sustainability, you need to go deeper.”