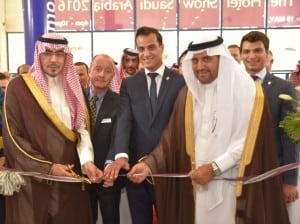 Patronage of His Highness Prince Abdullah bin Saud bin Mohammed bin Abdul Aziz Al Saud, Chairman of the Tourism Committee in Jeddah, who was accompanied by Mohammad A. Al-Amri, General Manager, Jeddah and Makkah Province at the Saudi Commission for Tourism and National Heritage (SCTH).

Thousands of hospitality industry professionals are anticipated to attend the three-day event at the Jeddah Centre for Forums and Events, taking place until Thursday (17-19th May 2016; 4-10pm).

“Saudi Arabia’s hospitality industry is experiencing extraordinary growth. Here in Jeddah alone, the number of hotel rooms is forecast to double by 2018,” said Elliot Rizk, Vice President at co-organiser M.I.C.E Arabia. “The Hotel Show Saudi Arabia is the leading showcase of everything needed to build and run a hotel or restaurant in the Kingdom.”

Exhibitors revealed exciting new product launches on the first day of the event, particularly in the technology sector. Onity, a leading provider of electronic locking and guest access sys?tems based in Spain selected The Hotel Show Saudi Arabia as the platform to launch its innovative smart bracelet – Qing® – which enables hospitality guests to make payments and enter rooms and other access-controlled spaces.

Attendees to The Hotel Show can see the full Onity product range through a 360 degree, virtual reality (VR) tour via a VR headset. Mr. Denis Laburu, Onity Distribution Sales Director for Europe, Middle East and Africa said: “With the young population in Saudi Arabia, rising levels of domestic tourism, and high internet and social media usage rates – it is not a surprise that hotels here are becoming such a strong market for innovative technologies and in turn, the highest quality of service. There is a lot of opportunity here, and we have participated in every edition of The Hotel Show Saudi Arabia with great success. This year we plan to really exceed visitors’ expectations with our new product launches.”

Samsung launched a new hospitality management solution – LYNK HMS Solutions – which enables in-room smart TVs to act as a central control for guests to personalise room temperature, lighting and other factors, whilst the hotel can send personalised notofications.

Other product areas on display at the event include: interiors, lighting and design; operating equipment and supplies; HORECA; cleaning and laundry; food and beverage; and other hospitality related sectors.

Register to attend The Hotel Show and Vision Conference, Saudi Arabia 2016 on-site at the Jeddah Centre for Forums and Events for free. Find out more about the event, organised by dmg events and M.I.C.E Arabia, at: www.thehotelshowsaudiarabia.com