With its Muslim population numbering fewer than 1,000 people, it was a steep learning curve to understand the demand and supply chain of the halal market and the difference in certification between the Malaysian and Middle East markets.

Chile has, however, got its act together and by working closely with the Malaysia External Trade Development Corp (Matrade).

The South American country, with the help of the Department of Islamic Development in Malaysia (Jakim), has expanded its number of halal-based companies to 50.

“Halal-based industries are poised to gain significance in Chile in 10 to 15 years,” said ProChile trade commissioner and coordinator of Asean markets Jaime Rivera.

Apart from its famous abalone and other seafood products, it is looking to develop the halal certification for its dairy products, too.

Chile is the only Latin American country to participate in the 10th edition of the Malaysian International Halal Showcase (Mihas), currently on at the KL Convention Centre. 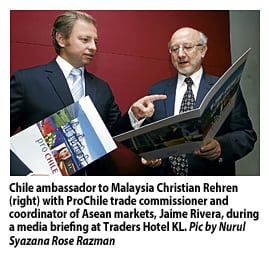 Its ambassador to Malaysia Christian Rehren said the Chilean banking industry, which is considered strong, does not want to be excluded from the fast-growing Islamic finance market either.

Towards this end, there are ongoing joint arrangements with the local Malaysian universities.

Just like the halal industry, the Latin American country has shifted its focus on the Asian region over the past five years, which explains its 44.1 per cent jump in export numbers, mostly to China, South Korea and Japan.

A major food producer, especially fruits and vegetables and seafood, Chile has also targeted to move into the top 10 of global producers from its 16th position.

Like Malaysia, trade remains the engine of growth for Chile and it boasts of 22 FTAs with 60 countries.

Pacts with Singapore, Brunei and Malaysia are in place while the ones with Thailand and Vietnam will take effect next. Also on its FTA plate are the Philippines and Indonesia.

As to whether the Trans Pacific Partnership (TPP), in which both Malaysia and Chile are also partners, would boost the export numbers, Rehren said there is unlikely to be a strong boost as tariffs are already at near-zero levels.

On the investments side, he said the growth potential must be tapped since Malaysian investments only totalled US$23 million (RM70.8 million) to date.

Airports, connectivity (wireless) and energy are top of the list while the fast-growing retail industry in Chile will also welcome Malaysian players, he said.

“Surgical gloves and wooden furniture are in demand. We also hope that Proton will return to Chile after a lapse of more 15 years.”

Seafood exports grew by 57 per cent from US$9 million in 2011 to US$14 million last year, when the FTA took effect.

Bilateral trade is expected to expand to US$1 billion by 2016.