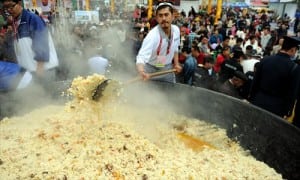 Halal food manufacturers in Northwest China want to become household names around the world. Eager for the economic rewards that breaking into the global market of 1.6 billion Muslims will bring, these firms want to be trusted by Muslim consumers around the world, especially in the sacred city of Mecca. But the pilgrimage to Mecca is not easy. Muslims in China, a non-Muslim country, have long been isolated from Muslims abroad and this has resulted in ritual and customary differences which are making it harder for Chinese companies to break into the market.

Zhang Hongyi is an ambitious man.

As the general manager of the Jingyitai Halal Food Company, located in Northwest China’s Ningxia Hui Autonomous Region, Zhang has plans to build a halal food factory in Dubai in the United Arab Emirates (UAE).

If his plans are a success, Jingyitai would become the first Chinese halal food manufacturer to make a direct investment in an Arab country.

“Our goal is to be one of the best halal food companies in the world. Jingyitai hopes that by setting up a factory in Dubai we will be able to sell our products to pilgrims on their way to Mecca,” Zhang, who was born in Yinchuan, the capital city of Ningxia, told the Global Times.

Halal, an Arabic word meaning “lawful” or “permitted,” is used to refer to food that fulfills Muslim’s religious dietary requirements.

Last month, Zhang chose a location for the new factory. The foundations are scheduled to be laid early next year.

China has a Muslim population of 23 million, a tiny fraction of the 1.6 billion Muslims living around the world.

With the support of the local authorities, halal food manufacturers in Ningxia have started to eye the world’s growing market for halal food and are eager to expand their businesses overseas to reach this potentially huge market.

However, how to gain acceptance from Muslim nations for halal food made in China, an overwhelmingly non-Muslim nation, is a major problem.

Observers have said that China’s halal food manufacturers, who are mostly small- or medium-sized enterprises, face many difficulties in overcoming ideological and economic barriers to this kind of international trade.

For Chinese halal food manufacturers looking to expand their businesses, going abroad has become a necessity.

“China’s halal food market has its limitations. Even though we have 23 million Muslims, they live all over the country. It is difficult to reach many consumers in any one region due to traditional distribution models, which means it is hard for us to expand,” Zhang told the Global Times.

Li Ziran, the director of the Institution of the Halal Industry at Ningxia University, echoed Zhang’s statements.

“Most halal food companies [in China] supply only the local market … their scale is limited,” he told the Global Times.

According to statistics issued by the State Ethnic Affairs Commission, 97.3 percent of the 2,400 cities and counties in China surveyed have halal food industries, but the structure of the industry is atomized, lacking nationwide household names and leading companies.

The halal food market in Ningxia is typical of this trend. Statistics issued by Ningxia’s bureau of commerce show that there are 192 halal food manufacturers in Yinchuan, most of which have fewer than 100 employees.

A majority of halal food manufacturers in Ningxia need to modernize their production facilities to be able to compete with Muslim food companies in other parts of the world, but cannot afford to do so.

Zhang realized that this was necessary and in 2009 he transformed the company from a traditional pastry maker into a comprehensive halal food company that provides staple foods as well as frozen products.

The introduction of new technologies was key to this transformation, and since 2010 Zhang has cooperated with the China Agricultural University on research into methods to prolong the shelf life of frozen noodles, dumplings and rice while maintaining their flavor.

For a long time, for political and geographical reasons, China’s Muslims were cut off from other Muslim communities around the world, alienating them from the worldwide Muslim community.

Analysts have said that the cultural differences between Chinese Muslims and Muslims from other countries that have been caused by this isolation, including ritual and customary differences, might make it harder for Chinese halal food manufacturers to be seen as “authentic.”

Ideological differences between the Chinese government and the Muslim world is another hurdle that Chinese companies that wish to sell food in Muslim countries have to get over, Zhang noted.

“The truth is that China is a non-Muslim country and its ruling party promotes atheism. Despite our assurances that we are a Muslim company and that we closely follow the doctrines of the Koran during our manufacturing process, they distrust us and doubt our piety,” he said.

However, the difficulty of adapting your product to a different kind of customer is still one of the largest problems for companies which expand abroad, halal or not. One halal food manufacturer that attempted to go abroad, Hongshanhe, which produces chilies and hotpot ingredients in Wuzhong, Ningxia, started to sell their products in Malaysia last year. But his attempts have not been met with much success.

“How to localize the food to cater to the tastes and consumption habits of the local customers was our main task,” Ma Zhanjiang, owner of the Hongshanhe, told the Global Times.

The road to Mecca

Mecca, a city in Saudi Arabia considered to be the most sacred city in the Islamic world, has become the market of choice for Chinese halal food manufacturers looking to expand abroad.

“Mecca is the center of the Muslim world. If we can tap into the market in Mecca, we would become trusted by Muslims all across the world, making it easier to enter other Muslim markets,” Zhang told the Global Times.

Wang Guoqiang, author of the book The Halal Industry and Certification, agreed with Zhang and said that an effective way for Chinese halal food companies to open up the worldwide Muslim food market to their goods would be to gain recognition and be purchased by the Saudi Arabian government.

Every year, the Saudi Ministry of Hajj buys food and gives to pilgrims coming to the country. If a Chinese brand could become part of this, then they could gain the trust of Muslims around the world.

Last year, over 4 million Muslim people gathered in Saudi Arabia to celebrate the Eid al-Fitr holidays. Of the pilgrims, most of the were from Pakistan, Turkey and Egypt, as well as around 12,000 Chinese Muslims.

Each year, billions of US dollars are spent in Mecca during the Eid al-Fitr holidays, according to statistics issued by the Saudi Arabian Chamber of Commerce.

Saudi Arabia, a wealthy nation with little agricultural resources, needs foreign companies to supply food for the people that come to its cities on pilgrimage.

But, it remains very difficult for Chinese firms to enter this market.

Despite China being known as the world’s factory, its halal food exports only make up 0.1 percent of the world’s halal food market, according to statistics issued by the China Council For the Promotion of International Trade.

“The lack of a nationwide halal food certification system, similar to what other Muslim countries have, has become a major hurdle for Chinese halal food companies looking to go global,” Li told the Global Times.

Ningxia established China’s first halal food certification center  – the Ningxia Halal Food International Trade Certification Center in 2009. As of this month, the center has offered certification to over 100 companies and established a mutual recognition of halal food standards with seven countries, including Malaysia, Saudi Arabia and Egypt.

“Some countries have used the certification system as a trade barrier to prevented Chinese companies entering their markets,” Ma Bing, director of the Ningxia certification center, told the Global Times.

“They won’t import our products at all when my company attends the food exhibitions in Muslim countries. It is a trade barrier,” Zhang said.

To help overcome these barriers, the authorities in Yinchuan have introduced measures to help its halal food manufacturers go global.

In addition to setting up the Desheng Industrial Zone, which aims to be the center of Islamic industries in Ningxia, it has launched preferential policies such as tax breaks for halal food manufacturers looking to expand abroad.

Zhang’s plan is in line with President Xi Jinping’s “One Belt and One Road” development strategy that aims to encourage Chinese companies to expand abroad, especially into central and western parts of Eurasia.