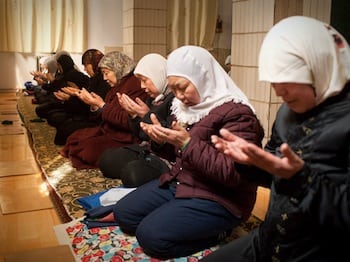 XINING – Welcoming the holy fasting month of Ramadan, tens of thousands of Chinese Muslims woke up very early on Friday, July 20, and went to the 600-year-old Dongguan Mosque in Xining to attend the first Fajr (dawn) prayers in the holy month.

“The month of Ramadan is the greatest and most revered month for Muslims,” Ma Yongliang, who runs a logistics company in Xining city, told Xinhua news agency.

“The prayer on the first day is also extremely important.”

Every morning, Muslims wake up at 3 am during Ramadan to prepare pre-dawn meal or Sahur.Living in an atheist country where the practice of religion is widely discouraged, Muslims in China are defying restrictions to keep hold of their faith.

The meal usually unites the family before men get out for fajr prayers at mosques.

Preying at home with other females in the family, Han Jing, 17, insists to pray five times every day.

She is also keen on reciting the noble Qur’an several times during the holy month.

“We have been abiding with the sermons of the Qur’an for centuries,” Ma said.

“Although our lives have undergone rapid changes, we still hold strong faith.”

Ramadan, the holiest month in Islamic calendar, started in China on Friday.

In Ramadan, adult Muslims abstain from food, drink, smoking and sex between dawn and sunset.

The sick and those traveling are exempt from fasting especially if it poses health risks.

Fasting is meant to teach Muslims patience, self-control and spirituality, and time during the holy month is dedicated for getting closer to Allah though prayers, reading the Noble Qur’an and good deeds.

Fasting for long hours in hot summer days did not prevent Chinese Muslims from setting an example for excellent work.

“I can not only take care of children and elderly people in my family, but also do some work at home which I get paid for,” said Han Yan, a worker of Qinghai Yijia Buhala Nation Fashion China Co., Ltd.

Yan confirmed that work has never affected her worship.

Over the past few years, the predominantly Muslim Hui ethnic group in Ningxia Hui autonomous region, one of the main Muslim-populated regions, has developed industry for homegrown Muslim traditional cap and clothing.

Their products have been exported around the world.

“Female Muslims could hardly earn money in the past, but the work is conducive to raise the status of a female in a family,” said Han Decheng, president of the fashion company.

The total output value of the Halal food industry in this region is expected to reach 20 billion yuan by 2015.

Balancing their work and worship life, the biggest dream for the majority of Chinese Muslims is to visit Makkah, the Muslim holiest city.

“Some elders in my family have been there, and I should realize my dream as well,” said Ma.

According to official data, China has 22 million Muslims, most of them are concentrated in Xinjiang, Ningxia, Gansu, and Qinghai regions and provinces.

Smaller Muslim communities can also be found throughout interior China.

Unofficially, Muslim groups say the number is even higher, stating that there are from 65-100 million Muslims in China — up to 7.5 percent of the population.