Muslims all over the world have opposed Denmark’s move to ban the slaughter of animals in an Islamic (halal) way and called upon their governments to stop importing Danish meat as long as the Scandinavian country refuses to respect their religious teachings. 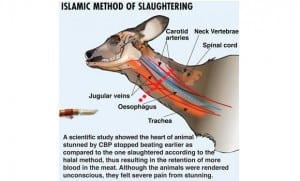 Dr. Zakir Naik, a respected propagator of Islam, emphasized that Islamic way is hygienic as it allows animal blood to be drained completely. “Blood is a good medium for germs, bacteria and toxins that cause various diseases,” he pointed out. Meat slaughtered by Islamic way remains fresh longer due to lack of blood, he said.

Denmark, meanwhile, tried to cool down the anger caused by its decision. Dan Jorgensen, minister for food, agriculture and fisheries, said in a statement on Sunday that “such (halal) slaughter is still legal in Denmark.”
The Danish Embassy in Riyadh defended Copenhagen’s position. “There is no ban on Islamic slaughter in Denmark, and animal sacrifice according to Islamic principles is still legal in Denmark,” it said.

“Unfortunately, the Danish government executive order has been portrayed and misinterpreted by the media, as if it was directed against the halal form of slaughter,” said Fikre El-Gourfti, deputy chief of the Danish mission. He claimed that the current procedure of stunning an animal before slaughtering it “is in accordance with the resolution of the Islamic Fiqh Council of the Makkah-based Muslim World League (MWL).”

The Danish diplomat noted that beef and poultry products are imported in large quantities by Saudi Arabia, while a growing number of Saudi and Muslim tourists, as well as businessmen, visit his country every year.

Zaid Khan, a blogger, urged Saudi Arabia and other Gulf countries to import halal meat from Muslim countries such as Pakistan, Turkey and Malaysia. “The Danish decision should make us think in a proactive manner.”

Another blogger pointed to the fact that US investors are now thinking of how to make a big business out of halal meat while the Danish government is antagonizing Muslim consumers.

Referring to the statements issued by Jorgensen, El-Gourfti said: “It is important for the Danish government that Muslims can buy halal meat in Denmark.”

He further explained that Jorgensen has been misquoted in many media reports as saying that animal welfare is above religion. “This is not correct,” said the Danish diplomat. El-Gourfti pointed out that the ministerial remarks were clarified by Jorgensen himself personally at a meeting on Friday with Islamic and Jewish organizations in Denmark.

This is not the first controversy of its kind created by Copenhagen. Islam is the largest minority religion in Denmark. According to the US Department of State, approximately 3.7 percent of the population in Denmark is Muslim.