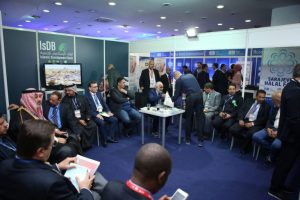 The Islamic Development Bank, one of the largest multilateral financial institutions in the world, has established the THIQAH Business Forum with the aim of establishing a unique and innovative platform that will enable businessmen to connect and create new business opportunities. The THIQAH Business Forum is the main window of the IsDB Group that makes easier the contact and coordination between IsDB parts and private companies and related institutions in the IsDB Group member countries. The main focus is to maximize cross-border investment among IsDB Group Member States, which will be supported by IsDB financial products and services.

THIQAH and Bosna Bank International have previously signed a co-operation agreement that includes co-organizing the Sarajevo Business Forum and Sarajevo Halal Fair events. Saudi businessmen are interested in cooperation in the field of halal-tourism and halal-food, and through the BBI VIP Business Club which operates within Bosna Bank International (BBI), business B2B meetings will be organized during the fair aiming to connect businessmen from Bosnia and Herzegovina, the region and Saudi Arabia.

The members of the IsDB THIQAH Business Forum are respected businessmen from the list of the richest people in the Arab world, and are some of the most eminent business subjects in the world, such as the World Bank, International Monetary Fund, Asian Development Bank, European Bank, World Trade Organization and many other. Participation in the SHF in 2019 has been confirmed and announced by participants from Bosnia and Herzegovina, Croatia, Serbia, Montenegro, Macedonia, Albania, Turkey, Malaysia, Indonesia, Austria, Germany, United Kingdom, United Arab Emirates, Bahrain, France, Lithuania and many others.