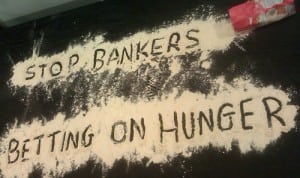 NGOs and investors are at odds over the effects of food speculation, causing the European Parliament to propose limiting direct stakeholder purchases, and Deutsche Bank to cover its tracks amid “a flood of accusations.” EurActiv Germany reports.

Deutsche Bank is being stubborn: It does not want to draw any conclusions regarding the correlation between its business policy, and the risk of food price speculation. But this is precisely the accusation coming from numerous NGOs, after a meeting with representatives on Wednesday (16 April) in Frankfurt.

“Neither could Deutsche Bank weaken the argument that their financial products contribute to price increases in food products, nor could it finally rule out connections to hunger,” criticised the NGO Foodwatch, which was invited to the meeting.

Similar to Oxfam and the German aid organisation Welthungerhilfe, Foodwatch believes that bets on changing prices for corn, soy or wheat are responsible for global hunger. Speculation drives prices for food products up, Foodwatch said, to the detriment of the poorest consumers.

But the details of the accusations cannot be analysed, as the conference of experts took place behind closed doors and the content of the debate is confidential.

No clear case of cause and effect

Nevertheless, it is clear that the accused see the situation differently.

“Reacting to a flood of accusations”, Deutsche Bank claimed its own activities in the food sector were put under particular scrutiny, and the factors for rising food prices were analysed and evaluated.

According to these, the conclusion was made that rising prices should be attributed to increased demand due to global population growth. And short-term price variations are also not necessarily the result of speculation. They are just as subject to weather-related production failures and politics as well as oil prices and changing exchange rates, Deutsche Bank said its findings indicate.

As a matter of fact, scholars themselves are divided over the extent to which speculation affects food prices, said Wolfgang Jamann who is secretary-general at Welthungerhilfe. But, he said, because the consequences for “starving smallholders” can be potentially fatal, it is not morally acceptable to bet on rising or falling food prices in the interest of short-term profits.

But this demand is rejected by Michael Schneider, investment manager at Deutsche Bank.

“It would be easy to say, we will keep our hands off – gaining applause from a few non-governmental organisations,” Schneider argued. Instead, he said he asks himself, “who represents the view of farmers in Africa in this emotionally charged discussion?”

From his own experience on the ground, the Deutsche Bank investor indicated: “When wheat at the commodity exchange in Chicago is expensive, then it is surely not a disadvantage for a farmer in Zambia.”

In Schneider’s view, the opposite is true: When prices are high it pays off for him to produce wheat beyond his own level of consumption because it would be quite expensive to import grain at high international market prices.

Markus Ferber, top candidate for the Bavarian Christian Social Union (CSU), agrees that speculation with raw materials is not bad per se, “as long as they offer the necessary liquidity for concluding forward transactions and there is a real interest in the product”.

The directive will put an end to “betting on food”, said Ferber, providing for strict upper limits in stock exchange dealings with raw materials and foods. In this way, it hopes to prevent actors who cannot prove any direct use of the product from buying up unlimited quantities.

“A chocolate producer has a real interest in cocoa and should therefore be able to secure the price of the harvest on the stock market. A financial actor who only wants to speculate on the price of cocoa never plans on actually acquiring the good”, explained Ferber.

“The rules that have been passed are a big breakthrough in stopping immoral roulette being played on the food, agricultural and raw materials markets”, said Udo Bullmann, chairman of the SPD in the European Parliament.

The Greens are also happy with the measure: Already in January, Sven Giegold, finance expert and spokesman for the Greens in the European Parliament, called the impending agreement a “magnificent victory for civic involvement in Europe”. Hard boundaries have been set for speculation on foods and raw materials in the future, he said, lauding the Parliament’s effort.

But Thilo Bode, head of Foodwatch, is disappointed in the new EU measure. Large loopholes still exist, he explained on Deutschlandradio.

The fact that every EU country will be able to set its own upper limits for speculation could lead to a race to the bottom, producing weak regulations, said Bode.

“After all, the European Union is one market. And if every stock exchange can limit the number of speculative contracts itself, then of course there will be a race to the stock exchange offering the best conditions,” Bode said. In this way restrictions on excessive speculations could be undermined.

David Hachfeld, trade expert for Oxfam Deutschland, points his finger at London as a financial centre. “This risk is particularly clear in the United Kingdom. A regulatory race to the bottom threatens to take hold among European financial centres,” he said.

But particularly in light of complex interconnectedness, Foodwatch is calling for more transparency from Deutsche Bank. As long as they do not disclose their speculative activities, constructive dialogue is impossible, the NGO said.

Deutsche Bank should finally reveal the promised studies over the effects of speculation in the food sector, Foodwatch demanded, calling on the investment giant to “finally stop distorting the arguments of their critics”.