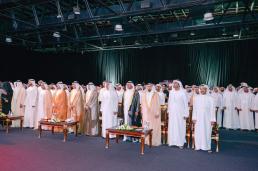 Under the patronage of His Highness Sheikh Hamdan bin Mohammed bin Rashid Al Maktoum, Crown Prince of Dubai, Chairman of the Executive Council of the Emirate of Dubai, the Forum will take place at the Department of Islamic Affairs and Charitable Activities in Dubai, in collaboration with the Dubai Centre.

Earlier today, the Forum began with the national anthem followed by recitation of verses from the Quran. A documentary about Dubai’s experience in various fields as well as the story of its success from a mere desert to an oasis of innovation was showcased. The film also highlighted the city’s key characteristics of diversity. With over 200 nationalities inhabiting the city, the film also exhibited strong infrastructure, economic dynamism and flexibility of legislation, and regulations of Dubai.

Director General of the Department of Islamic Affairs and Charitable Activities Department, member of Council for Islamic Economics Centre Dubai, Chairman of the Organizing Committee of the forum, HE Dr Hamad Al Shaibani highlighted the forum’s importance as a stepping-stone towards the establishment of a global reference. In his speech, he emphasized the standards of Islamic economics and pointed out that the presence of prestigious scholars from the Islamic law and economy makes the forum the most prominent of all, and puts it on the map of leading economies. Based on strong foundations of Share’a, the forum is set to become a leader of the Islamic thought and jurisprudence.

Shabani added, “The Department of Islamic Affairs and Charitable Initiative in Dubai comes as a consecration of the efforts of His Highness Sheikh Mohammed bin Rashid Al Maktoum, in upgrading Dubai to be an Islamic Economics capital of the world. We will do our best to translate the recommendations of the Forum into reality on ground. The decisions that arise out of the forum are bound to be the nucleus of the Islamic economic work. This is the beginning of the formation of a legislative doctrinal reference to Islamic economic action at the global level.”

Citing words of His Highness Sheikh Mohammed bin Rashid Al Maktoum at the launch of the initiative, Shabani said, “We’re in the heart of the Islamic world. A strategic location, innovative infrastructure, expertise and experience in the field of Islamic economics, has put us on the top. We will resolve to fulfill our goals and achieve our vision.”

In spite of all the obstacles, Dubai has become a land of opportunities with international schools offering its expertise. Shaibani comments, “We are counting a lot on the decisions that will be issued by the Forum, to become an anchor for Islamic transactions on a global level. This forum is only the beginning of more conferences and meetings that will frame a new phase in the Islamic economy.”

President of The Forum for Promoting Peace in Muslim Societies, Shaikh Abdullah bin Bayyah, also delivered his speech. His reputation as one of the world’s pre-eminent Islamic scholars, with enormous influence over Muslim scholars, and intellectuals from various denominations, marked the Forum’s importance. He confirmed that the relationship between peace and the economy is intimate. He stressed that the leaders of this country are aware of the dimensions of their key responsibilities; without their security and the blessings of God, we wouldn’t have witnessed so much prosperity.

He further added, “The Islamic economy is as old as Islam, but the need to look through the renewed vision in association with the worlds is of high importance. The Forum is here to ensure that all dealings come in Islamic context and builds a framework of the law.”

Abdullah Mohammed Al Awar, CEO, Dubai Islamic Economy Development Centre, said, “One of the key strategic objectives of DIEDC is to encourage research and studies related to Islamic economy jurisprudence and ensure the legitimacy of its provisions in Islamic banking transactions and products. The forum will serve as prominent milestone in marking the progress and evolution of Dubai as a capital of Islamic economy.

He added, “We are proud to convene some of the world’s best scholars and specialists whose insights will help formulate a new jurisprudential integrated system that encompasses all active sectors of the Islamic economy. We are confident our efforts will give Dubai the competitive edge as a hub for Islamic economy that is rapidly becoming a global economic system more countries are keen to adopt.”

The first session focused on the first axis of the Forum, a legislative axis that includes the assets of the economy in Islam. Managed by scientist Prof. Dr. Muhammad Abdul Rahim Sultan, Professor of Jurisprudence and the UAE University, the session has been reviewed by four researchers within this axis. The first of research by Dr. Mutlaq Jasser brings the origin the Islamic economy and the pillars. The second research by Professor Dr. Shawki Dunia, brings the problems faced by the economy, relative scarcity, divergent needs and limited resources. This research is impartial to the demand and supple needs in the economy.

As for the third paper presented by Dr. Hayel Abdul Mawla Tashtoush, the research shed light on the economic problem between characterization and solution of an Islamic economic perspective. Dr. Abdullah Mohammed al-Shami’s research titled, ‘Economy and Islamic Finance’ addressed alternatives to the global economic crisis, and highlights the causes of the economic recession that hit the world in 2008. The research also brings solutions inspired by the Islamic Law.

The second session was held under the leadership of Prof. Dr. Jassim Ali Salem Al Shamsi, former Dean of the Faculty of Law at the UAE University. The audience listened to the research presented by Dr. Abdasameea Al Anis, who talked about financing instruments and its equality in the Hadith Al Nabawi. Dr. Abdul Karim Ahmed Kunduz presented an extensive economic reading of the ‘Revelation Sharia Research’ to address Islamic finance, while Sheikh Shah Jahan Niqab exhibited his research of the assets of Islamic economics between businesses. He stressed the depth of Islamic law in the economic field and the need to activate them. Dr. Asmaa Fathi Abdulaziz concluded her session with her research on investment controls and money spends in Islamic law. She explained the flexibility, which is included in Sharia, in terms of the diversity of investment channels.

Once opened for discussion, the corridors of the meetings witnessed a great reaction from the audience. Appropriate and relatable topics with the desire to learn more about Islamic economic transactions overwhelmed the speakers. The activities of the Islamic jurisprudence forum will last up to 24th of March.