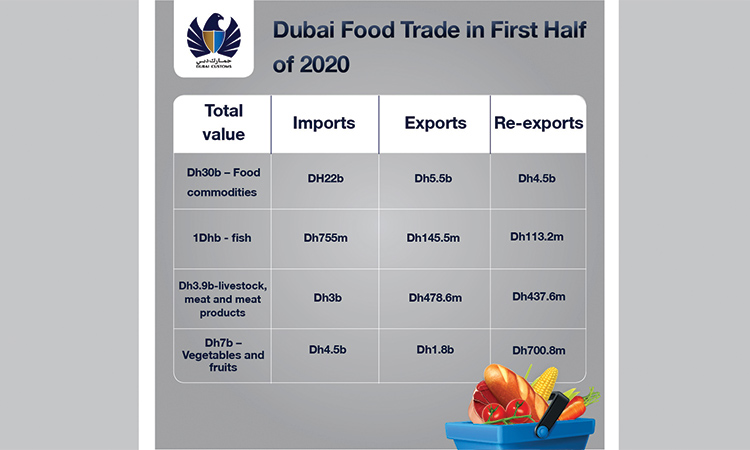 Sheikh Mansoor Bin Mohammed bin Rashid Al Maktoum, Chairman of Dubai’s Supreme Committee of Crisis and Disaster Management said the high value of Dubai’s external food trade in the first half of the year reflects Dubai’s role as a major gateway for global trade. The trade volumes also validate the effectiveness of food security strategies and the efforts of Dubai’s Food Security Committee to ensure high levels of preparedness to tackle unforeseen challenges.

Sheikh Mansoor noted that Dubai’s approach is in line with the forward-looking vision of Vice President and Prime Minister of the UAE and Ruler of Dubai His Highness Sheikh Mohammed Bin Rashid Al Maktoum; the commitment of Crown Prince of Abu Dhabi and Deputy Supreme Commander of the UAE Armed Forces His Highness Sheikh Mohamed Bin Zayed Al Nahyan to ensure the “UAE food supply chain will never be impacted”; and the directives of Sheikh Hamdan Bin Mohammed bin Rashid Al Maktoum, Crown Prince and Chairman of The Executive Council of Dubai. Dubai’s Food Security Committee, launched in response to the COVID-19 crisis, has succeeded in ensuring the community had access to abundant food supplies in spite of the challenges posed by the pandemic, he said.

The Dubai Customs supports the Dashboard by not only enabling food trading groups and food supply companies to conduct trade but also providing up-to-date data on the trade of food commodities and materials through a messenger system that draws information from customs clearances.

Ahmed Mahboob Musabih, Director General of Dubai Customs, said: “The UAE and Dubai place food security at the top of their priorities. Dubai is keen to harness its logistics capabilities, advanced technologies and proactive thinking to strengthen food security.”

“Food trade figures in the first half of 2020 reflect a healthy and robust economy. The high volumes helped ensure food security and meet local market needs for different food commodities in a timely manner even at the height of the global COVID-19 crisis,” Musabih said. “A number of initiatives taken by the government including the launch of a generous stimulus package boosted the business continuity of players in the sector and the broader economy,” he added.

Within its efforts to enhance Dubai’s leading position as a central hub for regional and global transit trade, Dubai Customs launched recently a guide on transit trade. The guide, prepared by the Tariff and Origin Department, outlines all the procedures and steps that need to be taken by companies to avail the services and facilities provided by Dubai Customs to transit activity.