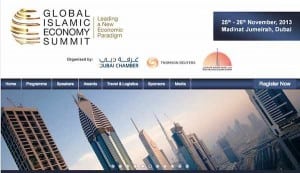 If executed with a sound strategy, Dubai has the potential to play a much more significant role in this context than ever assumed. And surprisingly, it has little to do with the city and more to do with its extended commercial tentacles.

With 1.6 billion Muslims around the world growing at more than two times the global population, companies operating in industries ranging from food to finance to fashion recognise there is a $4.8 trillion (Dh17.6 trillion) consumer market for Islamic products. Yet, it is not an easily accessible homogenous market due to a multiplicity of standards, local cultural preferences and manufacturing economies.

Currently, regulations for halal foods remain in most instances localised and are controlled by more than 300 disparate certification bodies around the world.

What does this have to do with Dubai’s potential as a hub for the Islamic economy?

Dubai’s strategic global assets place it in a unique position to rapidly change the landscape of halal product commerce through its trade-based tentacles, igniting the potential of the Islamic Economy.

For example, DP World controls more than 65 terminals across six continents including new developments underway in India, Africa, Europe, South America and the Middle East. In the UAE itself, DP World operates four ports that manage the largest capacity in the Islamic world. Expansions this year have resulted in significantly more capacity and will continue in 2014.

Dubai International was ranked the world’s sixth busiest cargo airport in 2012, handling 2.26 million tonnes of cargo and recording year on year growth of 3.1 per cent. Alone, Emirates SkyCargo, the largest airfreight carrier in the world by tonnage, transported 2.09 million tonnes across its network in the 2012-13 financial year.

Similarly in 2012, Dubai International was ranked the world’s second busiest airport for passenger traffic; it hit 32.6 million in the first half of 2013 following seven consecutive months of 5 million plus traffic.

The UAE and specifically Dubai’s influence on global trade throughout both the Muslim and non-Muslim world provides the Emirate with a unique opportunity to drive a Dubai-sponsored, but globally accepted, quality standard (inclusive of halal assurance). This standard could be used by all trading and export companies to essentially ‘passport’ their goods across different borders.

However, such possibilities are subject to one caveat. If we have learned anything about global standards, it cannot be seen to be a ‘one city only’ initiative. Dubai can lead it, seed it and sponsor its existence, but it needs to be able to work with the key stakeholder bodies around the globe such as the Islamic Development Bank (IDB), the Organisation of Islamic Co-operation (OIC), Standards and Metrology Institute for Islamic Countries (SMIIC) and the key importing countries to ensure maximum global acceptance.

Today, Dubai may not be thought of as the hub of Islamic Economy, but this wouldn’t be the first time Dubai has fundamentally changed the landscape of a global industry. When Dubai Airport started out in 1959 followed by the establishment of Emirates Airlines in 1985, no one imagined how it could shift the centre of gravity in global travel routes and the interactions between the world’s economic centres.

Owing to its strategic foresight, Dubai is now firmly implanted as the nexus between East and West; developed and developing; North and South; and a slew of other intercontinental relationships.

If done right, we can someday look back to 2013 as the year Dubai began to fundamentally change the Islamic Economy.

The writer is the global head for Islamic capital markets at Thomson Reuters.