Maybe. Most of us aren’t comfortable at the thought of chowing down on such bright sparks as dolphins, chimpanzees, kangaroos, or border collies. Then there are pigs, which researchers point out are inquisitive, attentive, social, and (relatively) sharp as tacks. And what about the octopus, which can outwit mazes, solve puzzles, and open the caps on child-proof pill bottles, a skill that eludes a lot of otherwise competent human adults?

But there’s also a whole other realm to consider: the plant kingdom. Are plants just so dim-witted that vegetarians are off the ethical hook?

Not so fast. Plants, it turns out, are smarter than they look.

Botanist Daniel Chamovitz, author of What a Plant Knows, writes worrisomely, “Plants see if you come near them; they know when you stand over them. They even know if you’re wearing a blue or a red shirt. They know if you’ve painted your house or if you’ve moved their pots from one side of the living room to the other.” 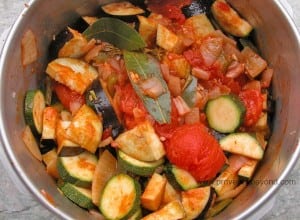 If so, this certainly means that they know when they’re being picked and turned into ratatouille. Tomatoes and cucumbers, peppers and zucchinis; They’ve all got an eye on us. It’s an unsettling thought.

A prime mover in the modern field of plant intelligence is botanist Anthony Trewavas of Scotland’s University of Edinburgh, who defines intelligence as the ability to sense the surrounding environment, analyze the results, and, based on input, make decisions as to how to behave. Plants, says Trewavas, have these abilities in spades, but we tend not to notice this much since plants, in general, are slow responders. Anchored in place as they are, their prime response to external cues—such as sun, shade, water, rocks, neighboring plants, or predators—is to change their growth pattern, which isn’t always exciting.

On the other hand, there’s now evidence that plants can actively learn and form long-term memories. Australian ecologist Monica Gagliano works with Mimosa pudica, nicknamed the sensitive plant or touch-me-not because it rapidly folds up its fern-like leaves if bumped, shaken, poked, landed upon by a bug, or approached with a lighted match. In Gagliano’s lab, potted mimosas were dropped from a height of about six inches onto a foam pad—a harmless jolt that nonetheless caused the plants to nervously close their leaves. After repeated drops, however, the plants ceased to respond, having apparently analyzed the situation and determined that dropping wasn’t dangerous.

And the plants remembered their experience up to a month later. While untrained newbie mimosas panicked and clapped their leaves shut in response to the drop, the trained plants kept their leaves calmly open.

Such results can make us see plants in a different and somewhat unnerving light. Do our gardens remember that we’ve been prowling through them, picking the lettuce and uprooting the beets? Think of the scene in the 1999 movie Notting Hill in which William, played by Hugh Grant, has dinner with Keziah, a self-described frutarian, who believes that fruits and vegetables have feelings, and so will only eat things that have spontaneously fallen off the vine.

“So these carrots…?” ventures William.

“Have been murdered,” responds Keziah.

Still, however responsive and sensitive they may be, plants don’t have brains. (A scientific group known as the Society for Plant Neurobiology, repeatedly attacked by purists pointing out that plants don’t have neurons, recently caved and changed its name to the Society of Plant Signaling and Behavior.) Whatever intelligence plants have, it’s nothing like ours; and most people, the fictional Keziah aside, don’t find eating fruits and veggies ethically iffy.

When it comes to animals, though, the question of who eats what becomes murkier. Anthrozoologist Hal Herzog, author of Some We Love, Some We Hate, Some We Eat —subtitled “Why It’s So Hard to Think Straight About Animals”—points out that our ethical relationships with animals are messy and inconsistent. We treat dogs and cats as members of the family—Americans reportedly spend about $50 billion a year on their pets—but send over 20 billion animals a year to the slaughterhouse to provide us with hamburgers, ham sandwiches, and chicken nuggets.

However we make our decisions, it’s clear we’re not basing them on smarts. Pigs are as bright as human toddlers. Given the chance, they form best friendships, enjoy music, like toys, and can even be taught to play video games. Even the scatty-seeming chicken is surprisingly intelligent, with a battery of sophisticated communication and problem-solving skills.

Michael Pollan in The Omnivore’s Dilemma suggests that our eating-animals schizophrenia—as in dogs, no; pigs, yes—is a case of out of sight/out of mind, in which mental blinkers allow us to draw a line between household pets and food animals. Most of us seldom, if ever, visit feedlots or slaughterhouses, which means that we don’t have to deal with the realities of meat processing. Many people, in fact, rarely see pigs, which makes it easier for us to divorce the animal on the hoof from the chop on the dinner plate.

Some psychologists argue that awareness makes a difference here: That is, the better informed we are about the intelligence and emotional complexity of animals, the less likely that we’ll be willing to eat them, and the more likely that we’ll be concerned about their living conditions and well-being. Such is the point of Farm Sanctuary’s The Someone Project, an animal-advocacy program which seeks to promote empathy with farm animals. By educating the public about animals’ intellectual and emotional capabilities, they hope to promote humane treatment of livestock and to encourage people to go vegetarian.

In the meantime, many of the 97 percent of American adults who are meat-eaters exist in a state that Pollan describes as “ethical heartburn.” They like animals, but they also like T-bone steak.