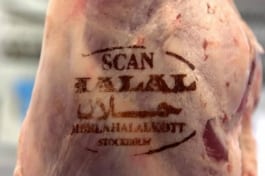 Members of the European Parliament are calling on the European Commission to release a delayed report on method-of-slaughter labelling in order to hold a “proper debate” on labelling and animal welfare issues.

However, overcoming some sensitive cultural areas could prove to be contentious, as certain factions seek to exploit attitudes to religious slaughter.

On 17 March, a group of far-right MEPs pushed the issue through a parliamentary question, which explicitly made reference to religious or ritual slaughter. The group of 40 MEPs mainly consisted of members of France’s Front National, but also included members of Lega Nord from Italy, the Dutch Freedom Party, the Austrian Freedom Party and other right-wing MEPs from Bulgaria, Denmark and France, as well as a Swedish liberal.

The group wanted to know if there were EU plans to introduce a “clear, reliable labelling system for meat originating from ritual slaughter”. If so, they asked: “When can we expect proposals from the Commission to deal with this issue?”

When asked to respond on the issue, the Halal Food Council of Europe declined to comment to GlobalMeatNews.

The majority of MEPs currently favour some form of method-of-slaughter labelling, in the form of ‘stun’ and ‘non-stun’ labels that would satisfy both animal welfare and religious groups.

“There are no easy solutions here, a delicate balance must be struck between religious and cultural beliefs and animal welfare considerations,” James Nicholson MEP, a British conservative and member of the European Parliament’s agriculture committee told GlobalMeatNews.

“Despite what is undoubtedly a delicate issue, I and, I would imagine, many other colleagues in the parliament believe that this report should be made available, so that we can have all the facts on the table and have a proper debate on the labelling and animal welfare issues,” he said.

The report, which will cover welfare labelling issues of all kinds, has been expected since last summer (2014). Parliament sources said that a release was “expected soon”.

Glenis Willmott, a British socialist group MEP, put a question to the Commission in October 2014 on the release date for the delayed report. She told GlobalMeatNews there needed to be “honest and transparent” labelling where slaughter is concerned. “I would like to see all meat labelled, using either ‘pre-stunned’ or ‘not pre-stunned’. This will avoid singling out any type of meat, but give animal welfare-conscious consumers the information they need,” she said.

According to Nicholson, within the European Parliament “there is broad support for ‘stun’ or ‘non-stun’ labelling, encompassing both animal welfare and religious groups. I would be in favour of such labelling, as I consider it essential that the consumer in the shopping aisle must have all the relevant information before making a decision.”