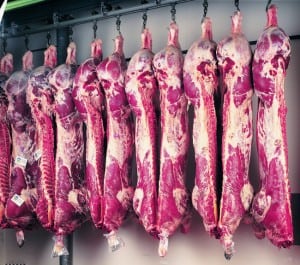 Anastasiya Aliyeva, head of Fresh Food research Euromonitor International, London, says that the demand for halal meat, an important feature of life across Muslim communities, is growing rapidly as the Muslim share of the global population has increased steadily and is projected to reach about 26% by 2030.

In the Middle East and Africa region, fresh meat volume sales rose by 19% over the same period, well above the global average of 13%. Strong growth was recorded in many Muslim countries within the region, for example the United Arab Emirates at 33%, Egypt at 28% and Morocco at 19%. In these markets, nearly all meat is halal.

In Asia-Pacific, Pakistan, Indonesia and Malaysia also performed well, registering fresh meat volume sales increases of 54%, 16% and 15%, respectively, between 2009 and 2014.

“In other countries where Muslims make up an important minority, between 3-10% of the population in countries such as France, Germany and the UK, the rising demand for halal meat manifests itself on several fronts and particularly in the consumer foodservice channel. Euromonitor International’s consumer foodservice data shows that Germany is by far the largest market for Middle Eastern full-service restaurants, with value retail sales price sales of EUR2.3 billion in 2014, accounting for 23% of the regional total. Many fast food and restaurant chains in the UK offer halal meat. For Middle Eastern fast food, the UK leads the way ahead of other Western European countries, with 2014 value sales of £3 billion (EUR3.7 billion), equating to well over a third of the region’s sales,” Aliyeva said.

In her opinion, supermarkets lose on trust because, in many instances, they fail to clearly label halal products as such or explain the slaughter method.

“The growing halal market offers increasing opportunities to meat and poultry farmers, manufacturers, retailers, exporters and foodservice operators. Religious slaughter practices are allowed in most countries, although there is an ongoing debate on the acceptance of variations in slaughter procedures. Currently, halal labels do not explain whether meat comes from pre-stun animals or non-stun slaughter. In order to respond to the demands of Muslim consumers, a consensus on halal meat requirements must be reached. Furthermore, a universally accepted halal standard label should be introduced to help inform Muslim shoppers that the food offered to them is sharia-compliant,” Aliyeva believes.