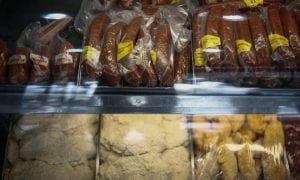 Another ban on Brazilian meat imposed by Chile sparked fears of a trade spat between the two South American partners.

A charm offensive by President Michel Temer, who even invited foreign ambassadors to a traditional meat restaurant in the capital Brasilia late Sunday, failed to calm importers.

China, which with Hong Kong is Brazil’s biggest meat export market, said it needed to know more about the allegations that major meatpacking businesses bribed inspectors to get health certificates and masked tainted meat as fit for consumption.

“Until it receives more information, China will not unload meat imported from Brazil,” the Brazilian agriculture ministry said.

“We expect more than 30 countries to question Brazil about this issue,” Maggi told a news conference.

If all of them halt imports of Brazilian meat, it will be catastrophic for the country, the minister said.

The European Commission, the EU executive arm, called on Brazil to immediately halt exports by four companies implicated in the scandal, the bloc’s spokesman Enrico Brivio told reporters in Brussels.

Shortly after, the Brazilian government said it had complied, halting exports by all 21 meat processors under investigation.

“We are major importers of Chilean products: fish, fruit and other products, and Brazilians demand that we should erect barriers. Trade is like that,” Maggi said.

Tensions escalated between the two countries late Monday, when Furche said Chile will not act “according to threats” and reiterated his request for official information regarding the scandal.

South Korea, for its part, lifted a temporary suspension on the distribution of chicken already imported from Brazil, after authorities there performed quality inspections and confirmed that no tainted poultry had entered the country.

It has no plans to close its market to Brazilian meat, the South Korean embassy in Brasilia said.

Japan, another of the industry’s principal markets, said it was considering issuing a notice to customers.

At least 30 people have been arrested in the scandal, with Brazilian police raiding more than a dozen processing plants.

A poultry-processing plant run by the multinational BRF group and two meat-processing plants operated by the local Peccin company were shut down, the agriculture ministry said.

Brazil is the world’s biggest beef- and poultry-exporting nation and the row is especially unwelcome when the country is struggling to overcome its worst recession in history.

“Brazil is facing a potential loss of export revenues of about $3.5 billion. That’s the equivalent of about 0.2 percent of GDP,” Capital Economics said.

“The economic impact will depend to a large extent on how long any bans stay in place. There are some reasons for optimism here.”

Officials are arguing that there is no systemic corruption or health problem in the meat industry and that the police operation uncovered only a few bad apples.

“Agribusiness is extremely important for us in Brazil,” Temer said in an address Monday. “It cannot be discredited just because of a small group.”

The scandal also broke just days before the start of negotiations to seek a free-trade accord between the European Union and several South American countries including Brazil.

Brazilian meat is exported to more than 150 countries, with main markets also including Saudi Arabia and Russia.

France and other European countries are wary about opening up the EU meat market to countries in the South American Mercosur bloc, which includes major exporters Brazil and Argentina. Paraguay and Uruguay are the other members.