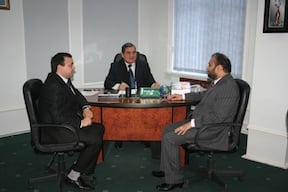 (Lahore – Pakistan ) Uzbekistan is an important Central Asian country with a population of 30 million; out of them 96% population are Muslim. It is not only enriched with gas, oil and other natural resources but, along with this, it has been the center of knowledge and Islam for a long time. It was through Uzbekistan that Islam paved its way to the sub-continent (Presently: Afghanistan, Pakistan, Bangladesh and India). Moreover, two famous Muhaddis; Imam Bukhari and Imam Tirmizi are also enshrined here. Uzbekistan’s cities Bukhara, Samarkand and Tashkent remained the hub of Muslim civilization’s knowledge and skills for an extended period of time and the whole world benefited from their skills and knowledge.

Muhammad Zubair Mughal, Chief Executive Officer of AlHuda Centre of Islamic Banking and Economics met with Ikram Ibragimov, the chairman of supervisory board of Hamkor Bank in Uzbekistan’s capital, Tashkent. During the meeting, they had a detailed discussion on affairs of their mutual interest for the advancement of Islamic banking in Uzbekistan. According to Mr. Ikram Ibragimov, Hamkor Bank is the only bank is Uzbekistan which is working in collaboration with international organization e.g World Bank, Islamic Development Bank, Asian Development Bank, European Bank, KFW, Triple Jump and others. He stated “We are happy to announce that AlHuda CIBE Pakistan will be our Advisor for Islamic Banking. They will provide us Consultancy, Shariah Advisory and Human Capital Development in this field so that Islamic banking can be initiated in Uzbekistan with sound foundations.” Furthermore, he said that their bank has a wide network in Uzbekistan through which they wish to render the services of Islamic Banking.

Mr. Muhammad Zubair Mughal said that it is an honor for AlHuda CIBE to provide professional services for the commencement of Islamic banking in Uzbekistan. He mentioned that Uzbekistan will prove to be a large market for Islamic banking in near future and there is a huge potential for other Central Asian countries to benefit from it as well. He thanked Mr. Ikram Ibragimov for choosing AlHuda CIBE for this purpose. A three-member delegation of AlHuda CIBE team will strengthen the human capital of Humkor Bank towards Islamic Banking at their office from this week for properly initiate assignment.

It should be noted that Hamkor Bank is a part of a large financial group of Uzbekistan. The group comprises of a bank, insurance company, 4 leasing companies and other institutions.