It is a $685 billion market that cuts across geographic, cultural and even religious boundaries. Can Dubai step in and change the rules of the game?

At a Halal market conference a few years ago, I overheard the comment, “We do the killing and the eating…and in between everyone else is getting rich.”

In a market where most of the Halal food is produced in the non-Muslim world by the likes of Australia, New Zealand, the Americas and India, this throw-away line had a distinct ring of truth to it.

The GCC food imports for 2012 were valued at $83 billion by the consulting firm AT Kearney, and expected to rise to $106 billion by 2017. That is a lot of chicken nuggets and lamb kebabs by anyone’s standards.

For a Halal food producer anywhere in the world, getting your products into the GCC market is the ultimate prize, and Brazilian chicken, Aussie beef, New Zealand lamb and Indian buffalo meat (for the lower price bracket) have been on the menu for decades. So could this be about to change?

Dubai’s ambition to be at the centre of the Islamic Economy opens up an interesting spectrum of possibilities. Consider the food supply chain: raw materials, processing, packaging, marketing and distribution…and not forgetting the key ingredients of finance and standards.

The Halal food market is financed almost exclusively with non-Shariah compliant finance, a nice oxymoron if ever there was one. So the observant Muslim could eat the food, but technically could not invest in the company that produces it.

There are dozens of Halal standards in varying degrees of use around the world by hundreds of Halal certification bodies, many of whom are not legally registered entities, and are not subject to regulation by any accreditation body.

These facts, once noticed, beg to be re-engineered. If we add into this picture the fact that the Arab world, not only dependent on imports for its food security, has a massive youth unemployment problem brewing away in the corner. Recent estimates put the unemployment figures for MENA region at 30% for men, and over 40% for women, with 60 million new jobs needed by the year 2020.

For a region where 62% of the population is under the age of thirty, this spells trouble…or, if you are a visionary with a sovereign wealth fund at your disposal, a massive opportunity. 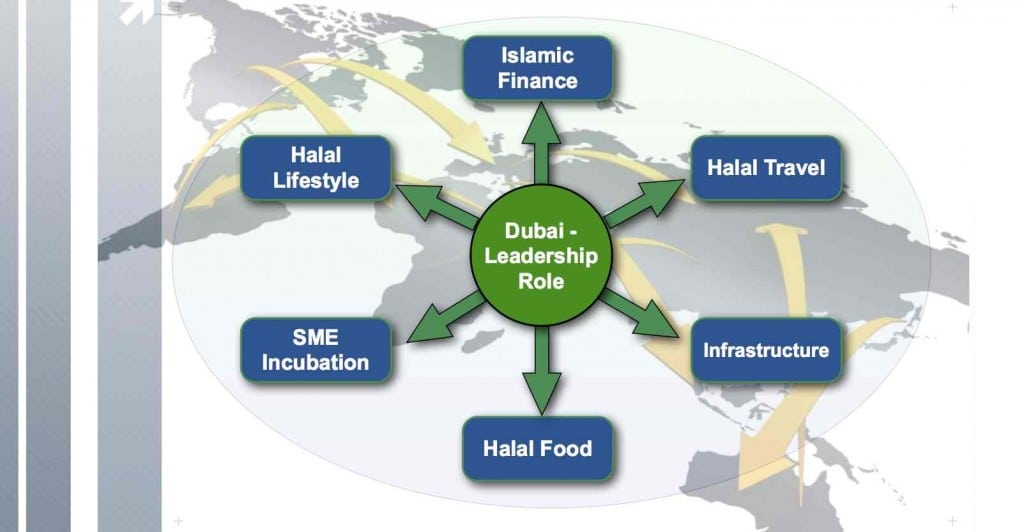 To pull this off, it would help to have a world-class container port and free-zone with millions of tons of raw and part-processed materials passing through it, giving the options for further downstream value-added processing by local SME’s. It would also help to be located geographically at the centre of the Muslim consumer marketplace, and to be an established air and sea transportation hub. It would also help to have, in addition to vision, the boldness to carry it off.

These ingredients Dubai certainly has. Let’s see if they can re-write the menu.

To find out more, visit www.globalislamiceconomy.com