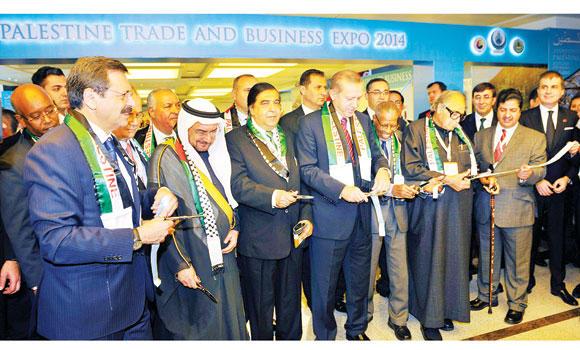 Halal food products stand at $2 trillion globally with Muslim countries accounting for $700 billion, according to a communique issued by the Islamic Chamber of Commerce and Industry (ICCI) during its meeting held in Istanbul (Turkey).

ICCI adopted its budget for 2015 during its 20th session recently in Istanbul which was attended by Turkey Prime Minister, Recep Tayyip Erdogan and Organizations of Islamic Cooperation (OIC) Secretary-General Iyad Amin Madani.

The summit, which also featured the Palestine Trade and Business Expo, looked at resolutions and explored ways of boosting membership and financial resources through an appropriate mechanism.

ICCI’s finance committee also had its 53rd session during which they agreed on the proposed budget for the 2015 project. It discussed the committee’s report for the promotion of an organic meeting and the development of the chambers resources, which was held in Jeddah last June, in addition to a brief report on the chamber’s activities and future events.

The meeting of the Finance Committee, held under the chairmanship of Omar Bahlaiwa, secretary general of the International Trade Commission, focused on a number of issues related to the revitalization of organic development of the ICCI financial resources.

The ICCI’s council session, held under the chairmanship of Saleh Kamel, discussed, among other issues, halal food and its significance for Muslims as recognized by ICCI. This includes the issuance of certificates for the products with a certain fee due to the volume of trade in halal products around the world.

The commission concluded with a number of resolutions, including the need to accelerate the implementation of the agreed recommendations, such as organizing a forum of the private sector and investors in one of the member countries annually to realize the appropriate financial revenue in support of the ICCI.

The annual forum will also organize exhibitions on the sidelines of every forum, and work to create a commercial arbitration center with the formulation of rules along the lines of the arbitration rules of the Paris-based International Chamber of Commerce (ICC) with the preparation of data and terms of the arbitrators of each member chambers.

The Istanbul recommendations also included the possibility of adopting trademarks of the ICCI’s products, halal certificates, trade shows and other proposed projects to achieve added value and as a means to enhance the ICCI resources.
The council agreed to convene the next session of both the assembly and the board of directors of the Islamic Chamber in Uganda from April 25 to 27.