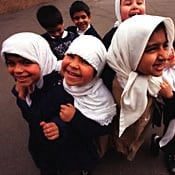 A council of mosques in Lancashire has accused its local government of providing illegitimate halal meat to local Muslim schoolchildren.

In two letters sent to Muslim parents in the area, the Lancashire Council of Mosques (LCM) urged Muslim parents not to allow their children to eat meat or chicken at Lancashire County Council (LCC) schools. One letter said: “Suppliers of ‘halal’ products are not accredited by any halal certifying organisation that is in line with the halal criteria adopted by the LCM.”

The LCM described how the schools of Lancashire fell into four categories where halal certification was concerned. It said there were those schools certified by the Halal Monitoring Committee (HMC); contracted by the Lancashire County Commercial Services (LCCS); self-managed; or under contract with the Local Education Partnership (LEP).

According to LCM chair Salim Mulla, only schools providing meat certified by the HMC can say the meat is halal, meaning Muslim children can eat meat at those schools.

However, on further investigation, MeatInfo.co.uk discovered that none of the food served by LCC schools was certified by the HMC, rather a mix of several agencies, including the Universal Halal Agency (UHA), the Halal Food Authority (HFA), the European Halal Development Board Agency (EHDA) and the Halal Authority Board (HAB).

County councillor Geoff Driver, who is leader of LCC, told MeatInfo.co.uk: “It is disappointing that LCM should make these misleading claims.

“We understand from the Food Standards Agency, which consults with national Muslim bodies, that there are a number of acceptable halal certifying agencies. All of our suppliers’ products are certified by such agencies.”

President of the HFA Khawaya Mahsood explained that what is halal was not dictated by any organisation, rather the Quran and the laws in Britain relating to the legal slaughter of animals – the Welfare of Animals Regulation.

Mahsood said of the LCM: “It’s only a group of people on their own sitting down making the law, which is against the spirit of British law and that of Muslim law.”

Glendale Foods supplies halal meat products to Lancashire schools and is accredited by the HAB. Glendale Foods technical director Stuart Newman said: “The issue with halal is that [the certifiers] are all companies that have set themselves up and ask for different things.

“All our food products we supply as halal are halal, because all of the ingredients that go into them are halal. We do two trace checks a year to satisfy BRC and we are BRC grade ‘A’ as well.”

This issue illustrates the inherent problems that occur when the Halal sector is left as an unregulated sub-sector of the UK food industry. Among the 1.7 billion Muslims around the world there are many interpretations of what is considered to be Halal. Different Halal certification agencies have a tendency to claim that their interpretation is correct, and others are not. It is often used a a ‘USP’ or unique selling point when promoting their own certification services.

As we have noted over the past decade in many parts of the world, if this process is not regulated by any higher authority, the resulting ‘certifier wars’ lead to an unending string of problems, such as those now encountered now by Lancashire County Council.

These issues are not, properly speaking, matters of the correct or incorrect application of Islamic Shariah law. The religious scholars and authorities throughout the Muslim world have, for the past 1,400 years, allowed and accepted differences of opinion as long as they can broadly demonstrate that they follow the normative guidelines of legal interpretation.

The respected scholars of Islam shy away from declaring that they are right and everyone else is wrong. To do so is generally regarded, among scholars, as an indication of ignorance, lack of education or at the very least a lack of courtesy.

It is worth noting that in this case, the insistence on HMC approval probably boils down to a position that regards unstunned slaughter as the only correct method of Halal slaughter. While it is evident that stunning was not used in animal slaughter at the time of the Prophet, may God bless him and grant him peace, there is a broad consensus among the leading Muslim scholars around the world that while stunning is disapproved of, if the animal is alive at the time of slaughter and was hand slaughtered by a sane Muslim adult, then the meat is acceptable for Muslims to consume.

It is also worth noting that in countries where there are officially legislated Halal Standards for commercial animal slaughter, NONE of them state that meat from stunned slaughter is forbidden. This includes the Standards of Malaysia, Brunei Darussalam, Thailand, Singapore, Indonesia and the countries in the GCC region, as well as major meat exporting countries such as Australia and New Zealand. It also applies to Standards drawn up and used by other groups such as the Halal Advocates or IFANCA in the USA and the certifying collective known as the World Halal Council with around 50 member organisations.

This acceptance (with disapproval) also applies to the Halal Standards that have been developed under the supervision of the Organisation of Islamic Conference (OIC) representing 57 member states of the Muslim world, such as the comprehensive Halal Slaughter Standard developed by the International Halal Integrity Alliance (IHI), as well as the Halal Standard developed by ICRIC/COMSEC, similarly in collaboration with the ICCI and OIC bodies.

One may argue, correctly, that the unstunned slaughter process is in accordance with the Qur’an and Sunnah, and is the authentic Prophetic method. However, to extrapolate this view to the position that if this particular method is not followed the meat is therefore Haram, has no legal foundation according to the consensus views of the majority of the scholars and jurists across the Muslim world.

The religion of Islam is to bring ease not difficulty. It is a middle way, not an extreme position. The Qur’an warns us “Do not make unlawful what God has made lawful”.

We must not lose sight of the reality that ‘Halal’ means ‘permissible’. It does not mean the best and only way.

Without an effective Accreditation structure in place, such as has been successfully adopted in countries such as Australia and New Zealand, and is now being proposed in the USA, Halal certification will remain an unregulated grey area, full of conflicts of interest that causes confusion, and encourages unscrupulous business behaviour in the guise of religious correctness.

LONDON – An umbrella Muslim group has accused the local government of the British county of Lancashire of providing pupils with illegitimate halal meat, calling for boycotting the food.

“And until they can find those suppliers there is no reason why they cannot give Muslim children vegetarian options or fish options until they find a supplier we can endorse from the council of mosques.”

It sent letters to Muslim parents in Lancashire, urging them to prevent their children from eating food at their schools.The LCM says food provided to Muslim pupils does not meet the halal standards set by the council.

“Suppliers of halal products are not accredited by any halal certifying organization that is in line with the halal criteria adopted by the LCM,” one letter says.

The LCM said that school suppliers do not meet their Halal criteria for meat killed in line with Islamic tenets.

“We strongly feel that Lancashire County Council is doing a great injustice to the Muslim community and young Muslim children by feeding them meat and chicken which have not been endorsed by the LCM,” the council said in a statement.

“Muslim children in their thousands have been victims of this in the past and we will not let this happen again.”

But the local government defended its position of providing meat to school pupils.

He argued that the council would not use suppliers who do not stun animals before slaughtering.

“This is acceptable to Muslims in the rest of the country and I am really, really sorry if the Lancashire Council of Mosques won’t accept that,” he said.

“We understand from the Food Standards Agency, which consults with national Muslim bodies, that there are a number of acceptable Halal certifying agencies.

“All of our suppliers’ products are certified by such agencies.”

Halal slaughter has been the subject of controversy in several European countries, where pro-animal groups seek to ban the ritual slaughter on grounds that it causes unnecessary pain to the animal.

Muslim scholars agree that Shari`ah provides a divine law of mercy that should be applied on all Allah’s creations, including animals.

The current laws in Britain allow slaughtering animals without prior stunning to enable Jewish people and Muslims to meet the dietary requirements of their faiths.

“It’s only a group of people on their own sitting down making the law, which is against the spirit of British law and that of Muslim law,” he said.

Britain has a Muslim community of nearly 2.5 million.

Muslim children in Lancashire are being urged to boycott meat provided for their school dinners.

The Lancashire Council of Mosques (LCM) said the latest school suppliers do not meet their Halal “criteria” for meat killed in line with Islamic tenets.

Hanif Dudhwala, of the council of mosques, said its own criteria were acceptable to all Lancashire Muslims.

But county council leader Geoff Driver said its supplier was approved by the same Muslim body used for the Olympics.

Mr Dudhwala said: “The county council should pick suppliers who are accredited to the Lancashire Council of Mosques and until they can find those suppliers there is no reason why they cannot give Muslim children vegetarian options or fish options until they find a supplier we can endorse from the council of mosques.”

He added the council of mosques set its criteria for Halal after consultation with Lancashire Islamic scholars.

The council ended its contract with the previous supplier after an inspection by its food standards department.

The LCM is urging Muslim parents not to allow their children to eat meat and chicken at schools that are supplied with meals from the county council.

But, Mr Driver said the council would not use suppliers who did not stun the animals before slaughtering.

He said it was “unacceptable” to use meat from animals which had not been stunned. “This is non-negotiable,” he added.

Mr Driver said: “This is acceptable to Muslims in the rest of the country and I am really, really sorry if the Lancashire Council of Mosques won’t accept that.”