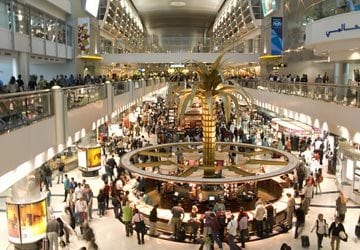 “Numbers don’t lie” may be a cliché, but it is still very true!

During 2007/2008, when we started our plans to launch Crescentrating, it was not really driven by numbers, but more out of a passion to help Muslim travellers make educated choices when they travel. However as we started our journey in 2009 by launching crescentrating.com and our rating system to rate travel services, it was obvious that we needed more than enthusiasm and passion to convince the industry to take note of these travelers.

By 2010 some destinations were already beginning to realize the potential offered by the Muslim leisure and business travellers. However, as is usual in developing any segment, we needed to have the numbers to back up the claim that it is an opportunity that the travel industry as a whole should seriously look at. This led to our first research activity on the Muslim Travel market. In 2010, based on our initial studies, we announced that Muslim travelers were spending close to USD 100 billion and are projected to spend USD 200 Billion in 2020. This was the first time this market was quantified. AFP carried the story in a landmark report “After Islamic food and banking: halal travel”. This report by Martin Abbugao for AFP, which was picked up by many media across the world, was truly a milestone in the development of this segment. It was the first time that mainstream media had reported on this “next” emerging Halal market.

As we continued our work with destinations and service providers, it was evident that a more comprehensive market study was needed to help take the discussion on this market segment to the next level. This eventually led us to partner with DinarStandard to jointly produce the “Global Muslim Lifestyle Tourism Market 2012: Landscape & Consumer Needs Study”, a comprehensive study on the Muslim Lifestyle travel market. The executive summary of the report can be downloaded here. 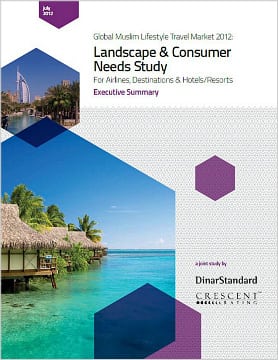 Crescentrating’s initial studies in 2010 indicated that during the mid 90’s, Muslim travellers’ expenditure represented only around 3.5% of the total global spend. Which shows that during the last 15 years, there has been a steady growth in this segment.

The Muslim population by 2020 will be around 25% of the world’s population. As such, even when this segment has reached 13.4% of the global spend in 2020, there will still be lot of room for continued growth beyond that.

What is very interesting for Halal industry players is that around 25% of the Muslim travel expenditure came from non-OIC countries. These include the UK, Germany, France, Belgium, the US etc. The 2nd and 3rd generation Muslims in these countries will be a consumer force to be reckoned with, not just in the travel segment but across all Halal sectors.

One of the most encouraging trends is that 50% of the travel expenditure was done in non-OIC destinations. This shows that Muslim travellers are beginning re-discover the enthusiasm to explore new destinations. While the pioneering Muslim travellers like Ibn Jubary and Ibn Batutta generally explored within the then Muslim world, the modern day Muslims are now ready to explore beyond their comfort zone.

This is good news to all destinations, both OIC and non-OIC. All of them have the opportunity to attract these visitors, by making sure that their basic requirements are met.

In my next post I will share the basic faith based needs of these travellers and how catering for those at the destinations not only will help attract them but also encourage new businesses in the destination.