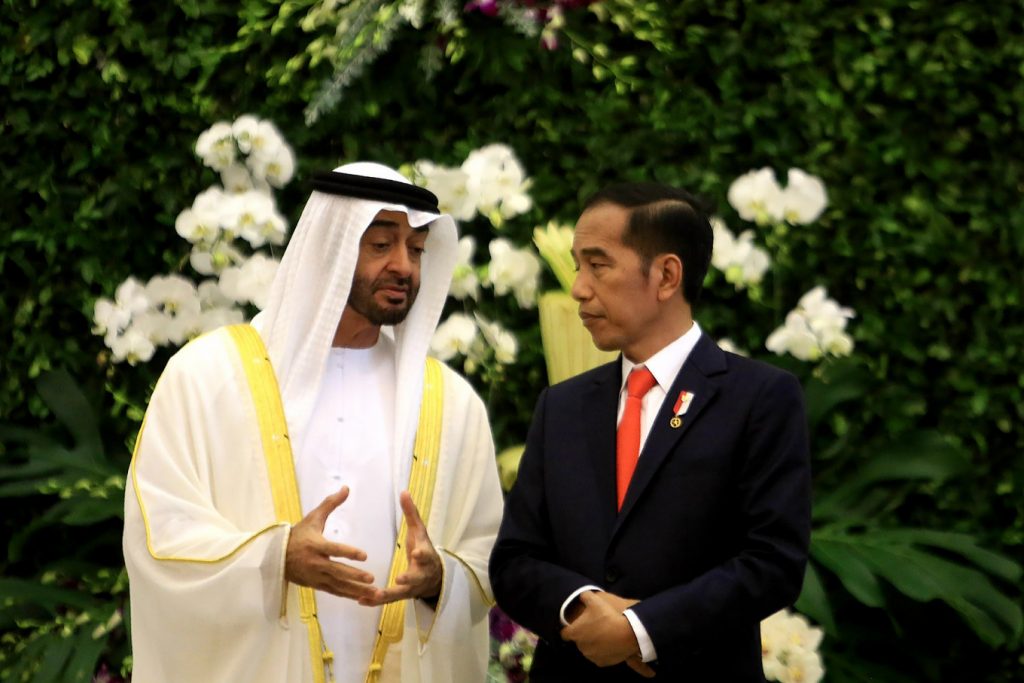 During a visit last summer where he strolled through the tropical gardens next to Indonesia’s summer Presidential Palace, Abu Dhabi’s crown prince offered to build a grand mosque for his host, Joko “Jokowi” Widodo. If that seemed like a generous gesture, the two men struck a bigger bargain within months, appointing the de-facto ruler of the United Arab Emirates to chair the steering committee for a new $34 billion Indonesian capital city.

It was a strategic match. Jokowi, as the Indonesian president is known, is eager to find investors in an ambitious $400 billion infrastructure program. Sheikh Mohammed bin Zayed Al Nayhan is looking to expand his country’s presence in fast-growing Asian markets. But there’s more to it than that.

Since meeting during Jokowi’s Middle East tour five years ago, the two leaders have become firm friends, forging one of those rare personal relationships among world premiers that extend beyond economic cooperation and can redraw the map of political alliances. As Jokowi’s investment minister Luhut Pandjaitan put it, the two leaders have come to refer to one another as “brothers.”

That relationship is creating an important new piece in Southeast Asia’s complex geopolitical puzzle as the US reduces its presence in the region and nations look for partners to offset the growing influence of China. The oil-rich Gulf state offers Indonesia an alternative to Saudi Arabia, its primary Middle East trading partner — one that may be more in tune with Jokowi’s political goals.

Indonesia is home to the world’s largest population of Muslims. Of the nation’s 265 million people, 225 million follow Islam and most are Sunni, the branch of the religion that predominates in the UAE and Saudi Arabia.

Both Jokowi and Sheikh Mohammed are considered moderates, opposing the influence of political Islam that holds sway in some parts of the Muslim world. The two nations have similar values when it comes to religious tolerance and the need for tough measures to combat terrorism, a UAE foreign ministry official said.

“Right now Indonesia’s relations with the Middle East as a whole are fraught with problems,” said Kevin O’Rourke, a political analyst who publishes the Indonesia-focused newsletter Reformasi Weekly. “There’s definitely scope for redefining the relationship between the two regions and put it on a lot healthier level.”

Sheikh Mohammed’s personal touch is one reason for the strong ties between the two leaders, with Indonesia’s cabinet secretary Pramono Anung recalling the prince’s sense of “intimacy,” including his lunch with Jokowi at a public venue. Indonesian officials were also impressed by the UAE.’s willingness to pursue agreements. Days after Sheikh Mohammed, chairman of Abu Dhabi’s $232 billion Mubadala Investment  wealth fund, offered to build the mosque, officials arrived to scout out sites.

In July 2019, it was Jokowi’s turn, hosting Sheikh Mohammed at the 19th century palace in Bogor, a city on the outskirts of Jakarta. The two walked in the botanic gardens and rode round together in a limousine. Companies from both sides worked $9.7 billion in deals that were among 12 cooperation pacts signed in industries from tourism to gas.

As the leaders’ relationship strengthened, so did the economic ties between their countries. On Jan. 12, the UAE committed to pumping $22.8 billion into Indonesia’s fund for infrastructure projects, including energy deals between the Abu Dhabi National Oil Company and Indonesia’s Pertamina and Chandra Asri. A day later, the crown prince was named chair of the panel that will steer the development of Indonesia’s new capital, possibly the world’s most ambitious urban project.

“The main reason to appoint the UAE crown prince to be one of the new capital advisers is to woo investment, particularly in energy,” said Asmiati Malik, a political economist at Jakarta-based think-tank Asian Scenarios. The UAE’s pledge in January “shows a long-term commitment,” she said.

For the UAE, which is looking to diversify its economy and build on its role as a global trade and logistics hub, populous Indonesia offers both a major investment opportunity and a gateway to Asia.

Jakarta’s problems are undeniable. It’s overcrowded, with as many as 35 million people living in the vast conurbation that extends around the city. It’s also at risk of inundation from rising sea levels. The new capital would be in the province of East Kalimantan, an area rich in coal and gas reserves, where palm oil plantations have yet to replace thousands of square kilometers of rainforest. 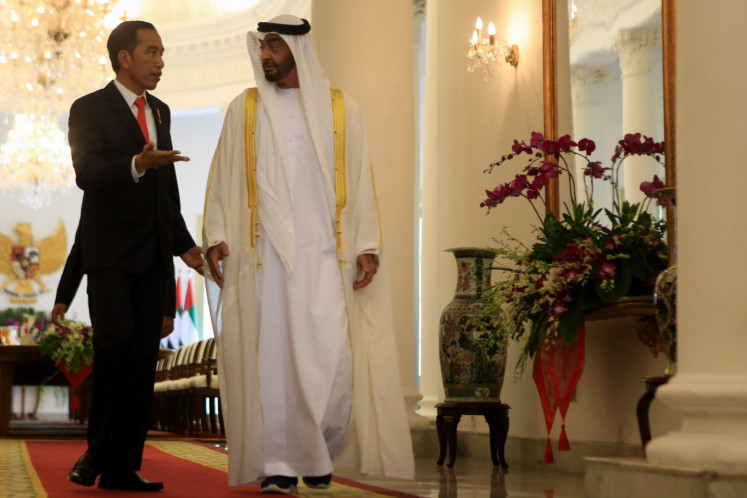 President Joko “Jokowi” Widodo speaks to journalists after the inauguration of three sections of Balikpapan-Samarinda toll road in in Samboja, Kutai Kertanegara Regency in East Kalimantan on Tuesday. (JP/N. Adri)

Since announcing the plans in August, Jokowi’s government has held a competition for a design and plans to begin construction this year. The central government is expected to relocate within five years. Details of the investment fund still need to be finalized through Indonesia’s parliament. This has been delayed because of the coronavirus pandemic, but should be able to move forward in the coming weeks, said Husin Bagis, Indonesia’s ambassador to the UAE.

The UAE, which rapidly built up Dubai and Abu Dhabi into modern cities, offers urban expertise as well as money. Emaar Properties is the master developer for Saudi Arabia’s King Abdullah Economic City on the Red Sea, a project the size of Washington DC, announced in 2005 and still under development. The UAE even plans to build a settlement on Mars by 2117.

But its terrestrial goals beyond the Emirates have not always been realized. Emaar chairman Mohammed Alabbar’s plans to lead the construction of a $45 billion new capital near Cairo never materialized. That city is being built by local firms after the government failed to finalize preliminary agreements with international investors.

Saudi Arabia has also been invited to invest in Indonesia’s proposed fund, which would provide money for the new capital, but the relationship between the two nations has cooled in recent years. While Saudi Arabia is Indonesia’s 13th biggest trade partner, it ranked 40th in 2018 in terms of foreign investment. In 2017, Jokowi publicly expressed disappointment that Saudi Arabia had prioritized investment in China over Indonesia during King Salman’s Asian tour.

Links continued to wane after the 2018 murder of US-based Saudi dissident Jamal Khashoggi and the Saudi execution of an Indonesian domestic worker. And in 2019, Saudi Crown Prince Mohammed bin Salman abruptly canceled the Indonesian and Malaysian stops on his regional tour.

“Jokowi has tried to build a strong partnership with the UAE instead of Saudi Arabia,” said Malik of Asian Scenarios.

But the UAE and Indonesia don’t have a strong track record yet of economic co-operation and O’Rourke said the impact of the coronavirus emergency could delay the construction of the new capital beyond the end of Jokowi’s presidential term, leaving its future in the hands of his successor.

For now, Jokowi’s administration is still working on the financing. After meeting with UAE officials in September, Pandjaitan flew to Washington to meet with Jared Kushner, adviser and son-in-law to US President Donald Trump, the minister wrote on Facebook. Indonesia later said the US International Development Finance would be involved, without specifying an investment.