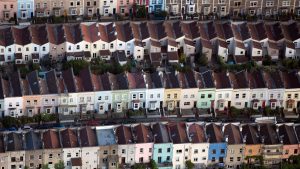 Across Western Europe and North America, the middle class is shrinking, according to a new report by the OECD. With each new generation, a smaller share of the population find themselves earning middle incomes.

The OECD defines the middle class as people earning between 75% and 200% of the national median annual income. Its data is an average of results from Canada, Denmark, Finland, France, the United Kingdom, Ireland, Italy, Luxembourg, Mexico, the Netherlands, Norway, Spain, Sweden, and the United States.

The “economic influence” of the middle class has also dropped sharply over time, said the OECD report, which was published on April 10. Across the OECD, middle incomes have increased by just 0.3% per year, on average, over the past decade. By comparison, in the decade before the financial crisis, middle incomes grew by 1.6% per year, and by 1% the decade before that.

Housing costs are squeezing the middle class the hardest; this now consumes a third of disposable income for middle-class households, up from a quarter in the 1990s. Housing and higher education expenses have been rising faster than middle incomes, the OECD said.

The gradual hollowing out of the middle class is a complicated story. For example, in the US, the Pew Research Center found that America’s shrinking middle class is the result of some people slipping into lower income classes, but an even larger share of the population rising into the upper classes. However, these figures disguise intergenerational inequality. Research led by Harvard’s Raj Chetty has shown that social mobility is declining, as fewer children earn more than their parents.

Indeed, for each new generation in the OECD’s aggregate average, the middle class is getting smaller, the upper class is stable, and the lower class is expanding.

The shrinking of the middle class is a cause for concern, the OECD says, calling for policy responses to support this group. The OECD warns that traditional middle-class jobs are threatened by automation, and it now takes more skills and more earners for a household to make it into the middle class. “The middle class used to be an aspiration. For many generations it meant the assurance of living in a comfortable house and affording a rewarding lifestyle,” the OECD said. “However, there are now signs that this bedrock of our democracies and economic growth is not as stable as in the past.”