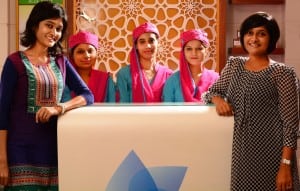 When Afreen Shaikh, a 26-year-old resident of Ahmedabad’s Muslim locality of Juhapura, heard there was a new halal cosmetic store called Iba opening near her home, she rolled her eyes.

“I have been to such places in Dubai and they think Muslim women should look like ghosts,” Shaikh said. “It is always some man working in the store, lecturing us about how the products we normally use are haram (Islamically prohibited). Then they try to sell us this ugly halal lipstick that has no style or colour.”
Shaikh was surprised then when she walked into the Iba store last month. “It is good that women work in the store because sometimes shopping for women in Ahmedabad is still like what that woman faces in Dum Laga Ke Haisha,” she said. In the movie, set in Haridwar in the early 1990s, the lead female character is seen looking for lingerie in a shop staffed by cringe-worthy men.

For Shaikh, the fact that Iba’s products are Islamically lawful and vegan is only one draw. “I don’t particularly care about halal but I don’t want to put a pig or any other animal on my lips. And when I shop, I do not want men staring at me,” she said.

“When I shop, I do not want men staring at me.”

For the company’s two founders, Mauli and Grishma Teli, Iba’s main selling point is that they are the first to provide halal cosmetics in India. But they are also trying to create a brand that understands women and is eco-conscious.

“We think the halal concept is the primary appeal and it will pull many in for the first time but our research shows we need to do more to bring them back,” the 32-year-old Mauli said.

Mauli and her sister Grishma spent six years researching and building their company, Ecotrail, before launching their first two stores in Ahmedabad last September. Both grew up as strict vegetarians and developed a love for science at a young age from visiting their parents’ pharmaceutical equipment manufacturing company. After they completed post graduate degrees from the US, they returned to their native Ahmedabad in 2009.

They both liked the idea of starting a makeup company that would create cruelty free products but they saw this as a crowded space dominated by very large companies like Lakme or niche Ayurvedic brands. They spent a few months traveling to beauty salons across India where many women, particularly Muslim, told them they did not wear certain beauty products that contained pig and alcohol. Given that India will have the world’s largest Muslim population by 2050 and currently has no halal cosmetics company, Mauli and Grishma realised that this could be a massive opportunity.

They named store Iba, which is Arabic for self-respect, and they began to scout for locations in Ahmedabad. When they settled on a space in Juhapura, the area’s wealthier Muslim residents looked flabbergasted: Why would you want to come here?

Eleven years ago, the entrepreneur Nadeem Jafri opened Juhapura’s first grocery story called Hearty Mart. It was two years after the 2002 Gujarat riots and many Muslims had moved to the area because they felt unsafe in other parts of Ahmedabad. Jafri painted his store with bright colours to cheer up customers. However, some suppliers refused to deliver products like Amul butter to his store because they saw Juhapura as a dangerous “mini-Pakistan.”

Today those prejudices still exist but he believes that the image of the area is slightly improving. His business is thriving and he stocks Iba cosmetics at his store, along with Amul butter.

“Today I focus on the positives of Juhapura because I want people to know that this is business-friendly area,” Jafri said.

Mauli and Grishma, who are both Jains, told me they did not face any questions or problems about their faith when opening their business in a Muslim area, but many, especially upper class Muslims, warned them that such a business might not survive. However, they studied the number of footfalls in Juhapura and together with their family’s support, invested Rs8 crore into launching the Iba brand and their first two stores. In designing their stores, they conducted extensive research and learned that Muslim women do not want stores decorated with green flags or Islamic imagery.

Muslim women do not want stores decorated with green flags or Islamic imagery.

It is the first thing Kulsum Mirza, 23, observed when she walked in the Iba shop with its floor to length windows, walnut-coloured wooden shelves, soft lighting, and Hindi television soap actresses in their adverts. Mirza wore jeans and a purple kurta and had shoulder-length hair. Like most customers at the Iba store, Mirza does not wear hijab. This is in contrast to almost every article written on Iba thus far, which portrays their customers with the stereotypical images of Muslim women in black burkas.

But still for women, Juhapura can be a challenging area. There are few coffee shops where women can’t meet with each other, let alone with members of the opposite sex.

Iba may be launching a home ambassador programme where women would travel from house to house, selling their products, which are priced between Rs100 and Rs300. It is one of the things that excites Jafri the most.

“If their store leads to the creation of women entrepreneurs in the area, it could really transform Juhapura,” he said.

But executing this idea, Mauli cautions me, might not be so easy.

In a conference room at their factory headquarters on the outskirts of Ahmedabad, Mauli and Grishma sit on a large table facing a white board that outlines what steps are needed to launch another store. While they did not wish to disclose their earnings thus far, they said that sales have far exceeded their expectations, especially from their tie-up with Amazon. Now they hope to add more stores in Gujarat and across India.

But staff retention remains their biggest challenge. Part of the problem, Mauli says, is that often after they hire a female employee, that employee’s father, husband, or brother tells her that she should quit her job because the family does not need the extra money, or that she is needed at home, or that it does not “look good.”
“It is a complex problem and I think it happens across the country,” Mauli said.
At the moment, Iba’s cosmetic products are also growing fast among Gujarat’s Jain community because they are animal free, but Mauli and Grishma do not want to over-emphasise this. In creating their brand, both of them learned that focusing too much on either their faith or their customer’s faith can be a distraction.
“We believe that all women are the same at some level—they want to look stylish, be eco-conscious, and be comfortable when shopping. We are not trying to solve any communal problems—we want women to feel good and to create a new space for them,” Mauli said.