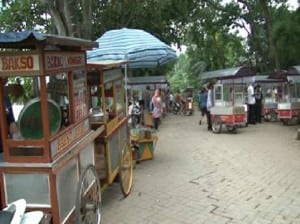 Hundreds of Small Micro and Medium Enterprises that produce foods and beverages will be facilitated by Jakarta City Government in getting halal certification from Majelis Ulama Indonesia or MUI (Indonesia Ulama Council).

“The governor put his concern on this thing. In 2014, there will be 750 UMKM to get halal certification,” said Jarot Syarifudin, Head Section of Jakarta Small Micro and Medium Enterprises Cooperation (KUMKMP) and Trades, Thursday (3/20).

According to Syarifudin, it is a right step to prepare the low-capital enterprises in welcoming global trade era. The consumer certainly would choose safe products that already have guarantee from competent institution. “This program will be run until 2017 and hopefully, 7,000 entrepreneurs could get this chance. This is a preparation step in welcoming global trade era in Indonesia,” he explained.

Jakarta City Government gives this facility without any charge. Usually, there are some charges to get verification process of halal certification. “The halal certification takes Rp 3 million for one kind enterprise and we’ll give it freely,” he said.

However, before doing MUI verification, Jakarta KUMKM and Trades Department will give a short training first. “It is aimed to give better understanding on producing and managing halal product, and so on from the competent speakers so that if MUI analysts come to check the products, it has been in through the right process,” he explained.