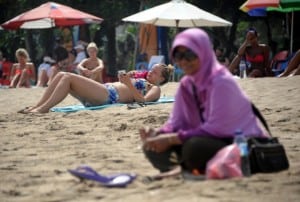 SENGGIGI, Feb 22 — Just a short hop from the Indonesian holiday hotspot of Bali, a Saudi tourist and his family listen to the call to prayer as the sun goes down on Lombok, the self-styled “island of 1,000 mosques”.

Lombok is at the centre of an Islamic tourism drive in Indonesia, which has the world’s biggest Muslim population and is hoping to boost the number of visitors from wealthy Middle Eastern countries.

While aiming to continue to attract Western tourists who flock to its pristine beaches, the island is also seeking to promote its Islamic heritage, from numerous places of worship to shrines dedicated to ancient Muslim preachers.

“I love it here because I can hear the azan (call to prayer) and people go to the mosque to pray,” said 58-year-old Sulaiman, the Saudi tourist, who gave only one name and was accompanied by his wife who was wearing an all-encompassing burqa.

Indonesia is the world’s biggest archipelago nation, made up of more than 17,000 islands, but has long lagged behind smaller, more developed countries in Southeast Asia, such as Malaysia and Thailand, in attracting tourists.

Foreign visitor arrivals to Indonesia rose to 8.8 million in 2013, according to official figures, compared with 25.72 million in Malaysia and 26.55 million in Thailand.

While there are no official figures for “syariah” tourism in Indonesia, the sector is experiencing strong growth internationally.

In a recent report, Muslim-oriented business group Crescent Rating, predicted the sector would be worth US$192 billion (RM700 billion) a year globally by 2020, up from US$140 billion in 2013.

Only around 190,000 Middle Eastern visitors came to Indonesia in 2013, according to official figures, but authorities hope their Islamic tourism drive can increase numbers.

The government has produced tourist guides promoting Indonesia as a “Muslim friendly destination”. It highlights the country’s best “syariah” tourism destinations and notes there are more than 600,000 mosques in the archipelago.

Authorities are planning to build a huge Islamic centre that will contain a mosque, a hotel and a study centre, and specially trained tour guides will point Muslim visitors in the direction of the nearest mosque at prayer time.

Other parts of Indonesia are hoping to benefit from the initiative. Aceh province, in western Indonesia and the only part of the country to enforce Islamic syariah laws, and the capital Jakarta are both seeking to lure Middle Eastern tourists, who often bring many family members with them and spend lavishly.

Riyanto Sofyan owns a chain of nine syariah hotels across Indonesia, including two in Jakarta.

Alcohol-free cocktails are available, the call to prayer is played five times a day through the buildings, MTV has been removed from the list of TV channels available in the rooms, as it is deemed too risque, and hotel staff gently turn away unmarried couples.

In Lombok, hotels are also promoting themselves as Islamic, with nine so far having gained coveted syariah certification. Echoing the system of stars for conventional hotels, syariah accommodation is labelled with the crescent moon, a symbol associated with Islam, with the best receiving three.

A hotel must have signs pointing towards Mecca and copies of the Koran in its rooms, as well as a kitchen where halal food can be prepared, to gain its first crescent moon.

Despite the optimism of officials, there are concerns that the push for Islamic tourism could put off other visitors who want to sunbathe in skimpy outfits and relax on the beach with a drink.

But the local government insists it can promote syariah tourism without affecting the existing industry, and that party hotspots in the area — such as tiny Gili Trawangan island, off the west coast of Lombok — will remain unaffected.

“We will make zones so that travel agents and guides have clear options depending on their guests’ wishes,” said local tourism chief M. Nasir, adding that visitors were already told they should not wear skimpy clothing when they head into cities or visit religious sites.

Nevertheless for some Muslims, the clash of cultures may still be off-putting. While Sulaiman, who comes from Mecca, was enjoying his holiday in Senggigi, the main tourist strip on Lombok, some aspects made him feel uneasy.

“I am not comfortable with a tourist place where there are people wearing things that are too revealing,” he said.

Others had concerns about trying to artificially separate Muslim and non-Muslim tourists.

American tourist Sarah Jorgensen, who was visiting Lombok, warned such a move could lead to tensions: “When you create borders then you have more opportunity for discrimination.” — AFP