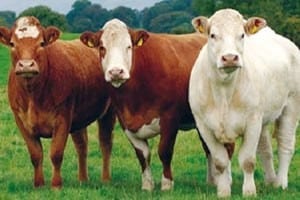 The non-stunning of animals pre-slaughter, for Halal purposes, is a contentious issue, according to Wicklow vet Pete Wedderburn.

Speaking on the Pat Kenny Show on Newstalk, he said that under EU animal law means animals must be pre-stunned before they are slaughtered, except for Halal meat.

“Most people believe that people of religious backgrounds believe that non-stunning is humane when done properly.

“It is so quick with sharp instruments that it’s instantaneous, which is not as humane as pre-stunning.

“In pre-stunning an electric current is run across the brain, the animal is unaware, then they are unconscious when their throat is cut,” Wedderburn says.

Wedderburn says that New Zealand and Denmark have tried to ban (non-stun slaughter) it altogether, with the UK calling for labelling of meat as to how it is slaughtered.

People who want non-stunned meat, also known as meat killed by the Halal practice, will find a source, if you go looking for it you will find it, Wedderburn says.

The vet also says that if there is a line done in a non-stun way, if there is a surplus to requirements to a specialist market, there’s nothing stopping them putting it into the chain.

He said he didn’t know the impact on price if meat was to be labelled with slaughter details.

“I don’t know if it would make a huge difference, it might be rejected by average consumer, it would be a hassle, it’s another thing to be done.

“In some cultures, religious leaders are accepting that stunning is acceptable in certain ways. It has to be done so that animals can walk away after being stunned, so no bolt stunning.

“They are adapting the faith, the throat is slit while it is living after animal can walk away from stunning.”

Painless, fear-free deaths of animals is what most people want.

In the UK, Halal is a way of life for the Muslim population, which represents 2.7m or 4.8% of the total population – up from 3% in 2001 and half of this demographic is under 25, AHDB, the organisation for the English beef and sheep industry says.