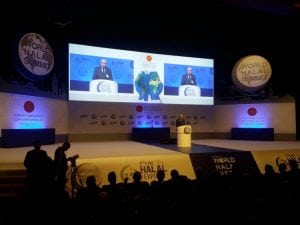 The summit kicked off with a recitation of verses from the Holy Koran.

‘Halal has already become a living style around the world. New technologies are important for extension of geography of the halal trading. This is a significant issue for Turkey. I’m sure that these issues will be comprehensively discussed at today’s summit. I sincerely greet you and wish the event a great success’.

Thereafter, Yunus Ete, the chairman of the World Halal Summit Council, said that the world halal sector is approaching $4 trillion with $2 trillion in Islamic finance products, $1 trillion in halal food, $250 billion in halal tourism, and the rest in instruments such as halal medicine, halal cosmetics and halal textile.

According to him, Turkey’s share in Islamic finance is $55 billion: ‘85% of the halal market is constituted from non-Islamic countries’.