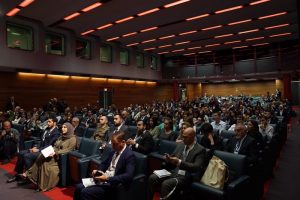 Dubai Islamic Economy Development Centre (DIEDC) participated in the fourth edition of the Turin Islamic Economic Forum (TIEF) as a strategic partner of the biennial event that seeks to highlight the impact of Islamic finance on socio-economic development. DIEDC led the UAE delegation at TIEF alongside the Dubai Culture and Arts Authority (Dubai Culture) that supported the Forum as an international partner.

Hala Badri, Director General of Dubai Culture said: “The Islamic Creative Economy is a growing global market and one that Dubai lies at the centre of. It can be broadly defined as any economic activities that include cultural or creative production, cultural events and activities, which are of Islamic origin, related to or inspired by Islamic tradition. Our entire cultural ecosystem is built upon this model and it is vital to discuss this at an international and strategic level.”

Abdulla Mohammed Al Awar, CEO of DIEDC, emphasised that the Islamic economy is one of the fastest-growing economic systems in the world due to its real potential and its important role in economic integration and responsible investment. He noted that the UAE’s participation in TIEF reflects the nation’s keenness to share best practices in Islamic economy and exchange experience with international markets interested in achieving an ethical and sustainable economy.

Al Awar said: “The Centre’s participation at TIEF 2019 reinforced Dubai’s position as a pioneer in technological innovation and responding to the latest trends dominating the economic landscape. They also raised awareness about Dubai’s creative potential and progress in developing the creative Islamic economy sector.”

“Italy is the third-largest economy in the European Union and is one of the most dynamic in the world. The economic growth experienced by Organisation of Islamic Cooperation (OIC) countries has increased interest towards the fast-growing Halal market. The rapid growth of the Halal industry has been noticed by the Italian market, and we have witnessed interest from more than 1,000 companies that have invested in products which align with the Halal market guidelines. Some products include food and beverages, cosmetics, pharmaceuticals as well as modest clothing,” said Amna Lootah, Assistant Director General of DAFZA

“It was an honour to participate as panelists at the Turin Islamic Economic Forum alongside our partners from the Dubai Islamic Economy Development Centre. During the panel discussion, we contributed by providing subject matter expertise and our global value proposition, the “Halal Trade and Marketing Centre,” a global business development Centre focused on Halal economy opportunities for the industry.”

“We have had very productive and enriching exchanges with Italian companies, who have shown great interest in the tailor-made services of the Halal Trade and Marketing Centre. The Centre will support the growth of companies and elevate them to their next stages of the Halal economic journey. We believe that these interactions will benefit both Italy and the UAE by contributing to the growth in Italian exports to Muslim-majority countries as well as strengthen Dubai’s position as the Capital of Islamic Economy.”

Saeed Mubarak Kharbash Al Marri, Deputy CEO of Strategy and Planning at DIEDC, led the first session, titled ‘Islamic Creative Economy and Halal Tourism’, that explored leading trends in halal tourism and examined the role of technology in developing the sector and sharing best practices with the Italian market. In addition, it presented an overview of Dubai’s cultural vision – a key element of the emirate’s economic diversification efforts.

The second session, titled ‘The Future of Islamic Economy: Introducing Blockchain and Artificial Intelligence’, discussed optimal ways of utilising modern technologies in the UAE and neighbouring markets. The conversation revolved around cryptocurrency adoption within Islamic financial entities and the impact of technological implementation in Islamic economy sectors on regulatory frameworks.

The Turin Islamic Economic Forum is organised by the City of Turin in partnership with the University of Turin, the Torino Chamber of Commerce, and the Association for the Development of Alternative Instruments and Financial Innovation (ASSAIF), and with the support of Turismo Torino e Provincia. Focusing on the opportunities offered by Islamic finance, the event encourages financial innovation as well as initiatives related to Islamic economy that promote inclusive socio-economic development.

The Forum provides a platform for companies based in Italy to forge industrial and supply partnerships with businesses in the Middle East, in addition to offering Italian public institutions and research centres the opportunity to interact with global players in Islamic finance and the wider Islamic economy. The City of Turin is keen to attract investments from countries in which Islamic finance plays a decisive role in public policies.