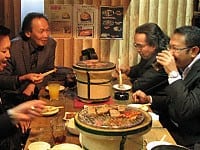 In the near future, more establishments are likely to offer halal-certified services for Muslim visitors. This might mean that there would be increased Muslim-friendly businesses around the world including Japan.

The world’s total Muslim population stands at around 1.6 billion which translates to about 25% of all the people in the world. With the new achievement, Japan should have a fair share of this number coming to tour the country.

Muslim Sharia law uses the word halal to refer to something permitted or lawful. The law strictly prohibits consumption of pork and drinks that contain alcohol. It forbids use of utensils or food that come into contact with other non-halal foodstuffs either directly or indirectly. The law presses charges to offenders of this rule and may force people to even pay interest among other penalties.

The Sharia rule is so particular to an extent that it sometimes contradicts other rules for companies and businesses. Due to this ambiguity, there are only few halal-certified establishments in non-Muslim nations, Japan being one of them.

According to Japan National Tourism Organization, there is increased tourist flow from Muslim populated countries to Japan since the year 2010. Such heavy Muslim populated nations are Malaysia and Indonesia among others. This trend indicates that more halal-friendly services in Japan could promote tourism industry to a great extent.

Akmal Abu Hassan has taken a great step towards this worthy course. He is Muslim and the head of Malaysia Halal Corporation Co. with its offices in Tokyo. He issued eight restaurants and six hotels in Japan with the important halal certificates.

Attaining these documents means a lot to several businesses. This being the case, like-minded non-profit organizations are helping companies that are trying to attain halal certification. They are doing so by inspecting the ingredients, methods of cooking and assessing whether they have the right information about the Mecca’s direction of prayers, what is known as “qibla.”

Obtaining the halal certification does not allow the establishments to tamper with quality. Regular inspections of businesses that have already received the documents are done in order to uphold quality. The inspections in Japan are usually carried out by Malaysia Halal Corporation which is an internal halal auditor recognized by both Indonesian and Malaysian governments’ associated bodies.

Japan has unique tourists’ attractions that charm even the Muslim travelers. In a bid to accommodate these special visitors, some tourist agencies have strategized on introducing tour packages that attract and cater specifically for Muslim travelers. One such agency is Miyako International Tourist Co. based in Osaka. It provides travel packages which are Muslim-friendly. The package evades tourists’ destinations that may offend Muslim travelers. It is no doubt that halal certification would determine the growth of tourism in Japan.