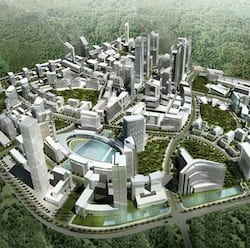 JOHOR BARU: Plans are in the pipeline to develop a dedicated halal industrial park in Iskandar Malaysia focusing on the halal food and agro-processing related activities.

Iskandar Regional Development Authority (Irda) chief executive officer Datuk Ismail Ibrahim said a feasibility study on the project had been conducted and expected to be completed next month.

He said there was a huge market for the halal food products globally not only from Muslim countries but also from non-Muslim nations.

According to The Halal Journal, the global halal market value for trade in halal foods is estimated at US$547bil a year, and the market has drawn interest from food producer countries worldwide. (Ed: This is the figure from 2006)

In this respect, Malaysia has the edge in being recognised internationally as a Muslim country that has the potential of becoming a major producer of halal food products.

Ismail said Marditech Corp Sdn Bhd, the commercial arm of the Malaysian Agriculture Research Development Institute had been tasked to undertake the study.

He said Irda had commissioned the company to undertake the study including proposing suitable business concept for the food processing activities due to its experience in the halal industry.

“We want to transform and position Johor as one of the leading halal food and agro-processing hubs in the region,” Ismail said in an interview with StarBiz.

He said by having a dedicated halal hub, Irda hoped to be able to attract domestic and foreign companies planning to relocate their halal food-processing operations to Iskandar.

“This will further reaffirm Johor’s position as the major food producer in the country, which the state had enjoyed in the past,” he said.

According to him, Sabah and Sarawak have taken over Johor’s position as the leading producer of oil palm in terms of planted areas but Johor still enjoys higher yield per hectare.

“Johor might not be a force to be reckoned with in commodity but that does not discount us from developing the food and agro-processing in Iskandar,” he said.

Ismail said the halal hub plan was in tandem with the key economic areas that are being promoted in Iskandar under the Comprehensive Development Plan, which runs from 2006-2025.

The sectors are electrical and electronics, petrochemical and oleochemical, food and agro-processing, logistics and related services, tourism, health, educational, financial services, and information, communications and telecommunication, and creative industry.

He said the time was right for Johor to venture into halal food and agro-processing downstream activities by sourcing raw materials from other places and not limited to the state only.

“We want Johor to be like Singapore the republic does not produce a single drop of petrol but it is now the third largest petroleum refinery hub in the world,” added Ismail.

Ismail said these locations were near to the Senai-Pasir Gudang-Desaru Highway in the Eastern Gate, Pontian in the Western Gate and Sedenak in Senai-Kulai.

He said all three locations were well-connected to airport, seaports and major highways as well as close to districts with strong agriculture-based activities such as Kota Tinggi and Kluang.

Ismail said the Bio Desaru Food Valley project in Kota Tinggi and Kluang well known for their strong agro-based activities were the other perfect locations for the halal hub.

“However, the choice of the hub will depend on the outcome of the feasibility study which will be out next month,” he said.

Ismail said although Iskandar was going for capital-intensive and high-technology investments, the agro-based manufacturing activities were still important due to its economic spillover effects.

He hoped that the Iskandar-based small and medium enterprises (SMEs) would be ready and prepared to participate once the project took off.

“The SMEs could play the supporting role to the bigger investors at the hub by providing related services or as suppliers of raw materials to them,” said Ismail.

He said Irda had never sidelined the SMEs and it was up to them to seize the opportunities offered by Iskandar Malaysia.

There are 69,000 SMEs in Johor and 49,000 of these are based in Iskandar. Johor has the third highest number of SMEs after the Klang Valley and Penang from the total 700,000 SMEs nationwide.