By Park Si-soo – The Korea Times 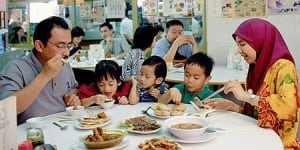 There are many marketing and sales tools that work universally. Yet they are toothless tigers in Muslim counties without halal certification.

Halal is an Arabic word meaning “lawful” and “permissible.” The certification is conferred on meat, vegetable and other food products that have been slaughtered, harvested or processed in a way recognized by Islamic Law.

It’s not mandatory for Muslim people to consume only halal-certified products, but it’s obvious certified products have a massive marketing advantage in these countries, according to experts.

Despite its proven advantages, such certification has long been ignored by domestic food makers because of low demand for Korean food in Islamic countries. Now, this is no longer the case. Many food giants such as CJ, Nongshim and Pulmuone are rushing to get their export products packaged with what they now call a “must-have” mark.

The change was driven by an explosive growth of demand for Korean food in populous Muslim countries such as Indonesia, Malaysia and Pakistan. The increase has largely been attributed to the international boom of Korean pop culture, a socio-cultural phenomenon called “hallyu.”

Many Muslim countries have their own independent guidelines for certification, which are not compatible with each other.

The Muslim population has increased 12 percent on average a year and is expected to make up 30 percent of the world population by 2025, according to a report from the United Nations.

Domestic food giant CJ CheilJedang recently earned halal certification or 30 food products, including steamed rice, dried seaweed and kimchi, from the Malaysian government. The company said the certification will ensure brisk sales of its products in the Southeast Asian country.

CJ aims for 10 billion won ($9.1 million) in sales this year and plans to increase its annual sales to 100 billion won by 2018. The firm is developing new products suitable for Muslim customers in Europe and the United States.

Indonesia is the world’s biggest halal food market worth $78.5 billion, according to the Korea Agro-Fisheries and Food Trade Corporation. Nearly 88 percent of its 240 million people are Muslim and they consume some 13,000 halal-certified products imported from around the world.

Korea’s largest bakery chain Paris Baguette earned halal certification from the Korea Muslim Federation (KMF) in December. The KMF’s certificate is acceptable only in Korea, but the firm believes that recognition will make it easier for the company to win halal status in major Muslim countries.

SPC, which owns Paris Baguette, is making headway to its ambitious goal of becoming the world’s largest bakery company by 2020. Its globalization strategy includes some Muslim countries in the Middle East.

Other food makers that earned halal certification from more than one Muslim state are Namyang Dairy Products, Nongshim, Pulmuone, Orion and Lotte Confectionary.

The government has rolled up its sleeves to help companies win the certification.

In March, the Korea Trade-Investment Promotion Agency (KOTRA) under the Ministry of Trade, Industry and Energy signed a memorandum of understanding with Majelis Ulama Indonesia, Indonesia’s top Muslim clerical body and halal certification issuer, to make it easier for domestic food makers to enter the Indonesian market.

The demand for halal food is also on the rise in the domestic market on the back of the increasing number of students and travelers from Muslim countries.

In March, Hanyang University in Seoul opened the country’s first halal food cafeteria on campus. “We have 80 Muslim students and the number increases every year. The cafeteria will help their settlement in Korea,” a spokesman for the university said.

The influx of travelers from Muslim countries is also on the rise as a result of hallyu.

Nearly 300,000 Muslim people visited the country last year with nearly half coming from Indonesia, according to the Korea Tourism Organization (KTO).

“The number of Muslim travelers to Korea continues to rise thanks to hallyu,” said Kim Hyo-jong, secretary general of the Korea Halal Import Export Trade Association. “We should try harder to provide them with better services.”

Kim noted that having more restaurants offering halal food is crucial for that end.

KOTRA urges the government to give full support on the matter.

“The global demand for halal-certified products will increase without stop and many global food giants have already improved their products lineup to meet this,” the trade promoter said in its global business report in October, 2010, referring to Nestle, Burger King and KFC among others. “Our start was late. Thus we need to make more efforts.”