Korea Malaysia Trading Sdn Bhd hopes to increase its sales revenue by 50% in 2014 from RM40mil to RM60mil after gaining halal certification from the Department of Islamic Development Malaysia (Jakim) for its food products imported from South Korea. 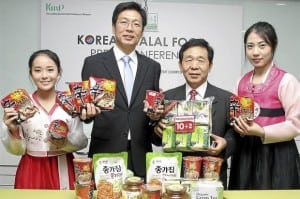 KMT chief sales and marketing officer Kelvin Tan Kean Peng said since the company’s establishment in 1994, they had endured many hardships and struggles to penetrate the Malaysian market with Korean food and beverage products, but he was thankful that the perserverance was paying off.

“With more people being exposed to Korean drama serials, K-Pop music and other things from South Korea, our products are gaining popularity from every segment of Malaysian society.

“However, after receiving the halal certification, we hope to achieve a boom in our sales as Muslims here can enjoy our products with the assurance that our products are halal for them,” he said after witnessing the official launch in First Avenue, Kota Damansara, on Tuesday.

He said Muslims generally had a bad perception of Korean food, as they assumed it contained non-halal ingredients.

However, Tan stressed that this was not true.

“More than a decade ago, we, together with food associations in South Korea, realised the potential in Korean food being exported to other markets worldwide, especially Muslim countries such as Malaysia and Indonesia.

“We eventually managed to convince four companies to conduct various research including numerous visits to these two countries to gather data and market research.

“When they were convinced of the immense potential, they began setting up new factories as well as tweaking their product preparation techniques to comply with halal standards while preserving the authentic Korean taste.

“Many years later, here we are at the end of that long journey,” Tan said.

Prior to receiving the halal certification, Korean food products sold here were generally targeted at the non-Malay crowd, in particular the Chinese community.

“Many of our products are available in most supermarkets, Korean restaurants and Korean supermarkets as well as hotels,” he said.

According to Tan, their marketing strategy to penetrate the Malaysian Muslim community would be to hold a series of food shows, food sampling, leaflet distribution and other efforts mainly focused on educating the community that the products are halal certified.