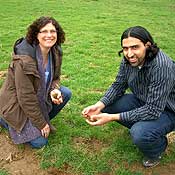 KAI RYSSDAL: The second night of Passover begins at sundown this evening. Families are going to be gathering for their Seder — part meal, part ritual that recounts the Biblical story of the Jews’ exodus out of Egypt. Brisket is going to be on a lot of dining room tables. And in observant homes, it’s going to be kosher.

Observant Muslims have dietary laws that are similar to kosher, they’re called halal. And that has made for at least one interesting business proposition.

Ari Daniel Shapiro has the story.

Ari Daniel Shapiro: Devora Kimelman-Block and Yasir Syeed walk along the muddy pasture of this farm tucked into the hills of southeastern Pennsylvania. It’s one of about 10 farms they contract with to provide sustainably raised beef, lamb and poultry.

Devora Kimelman-Block: I don’t think either one of us thought we’d run a meat business when we grew up, but you know, we saw a niche and we’re filling it.

Kosher and halal refer to practices and blessings that govern the slaughter of animals. The pair say most animals that become kosher and halal meat are raised on cramped factory farms with little thought paid to their well-being while they’re alive. For them, the industrialized approach undermines the intent of their religious dietary laws.

Yasir Syeed: The idea about halal and kosher: It’s not just, OK, was it cut the right way? Was the right thing said? Those are important too. But the whole spirit behind both of them is that when you’re taking this animal’s life, you’re doing it in a way that’s with dignity and with mercy. You also have to make sure that the whole life that it lived, also, is one that had dignity and mercy. And in a farm like this, I mean, the animals, they’re treated practically like family.

Syeed launched Green Zabiha about a year ago to offer meat that was not only halal but came from animals raised humanely on open pastures. Kimelman-Block started KOL Foods about six months earlier for the same reason for kosher meat. They met after a mutual acquaintance referred Kimelman-Block to Syeed when he was looking for suppliers.

Syeed: Someone just sent an e-mail letting me know that, “Hey, guess what? She’s selling this meat.” And I was so excited, so I reached out to her. Majority of Muslims consider kosher to be halal. And she had already started down the path of lamb, so I actually bought a box. I was one of her early customers in fact.

Now, they correspond often on issues like delivery services, slaughterhouses and refrigeration facilities.

Kimelman-Block: All the time, we’re trading notes back and forth of “this guy’s good, call this guy, and tell him you know me.”

Maya Shetreat-Klein: There is a shockingly large market for it, I find. It’s only been growing.

Syeed and Kimelman-Block have seen that trend too. They’ve each got hundreds of customers who don’t mind paying the added cost. Hannah Wheatley is one. She lives in New Haven, Conn., and buys 35 pounds of meat every few months from Syeed for herself, her husband and two boys.

Hannah Wheatley: It’s fresh, it’s lean. You don’t have to put a lot in it to get a lot of flavor.

Yasir Syeed and Devora Kimelman-Block admit their friendship is a little unorthodox, but it’s part of a bigger message.

Kimelman-Block: I think that there’s actually two or three different ways that Jewish and Muslim rituals really come together — and this is, like, one of the big ones. And so why not work together on it? I mean, it’s nothing but good.

Syeed: You know, sometimes people think interfaith is getting together and talking about your religion, my religion. Interfaith is just you know, it’s Devora and Yasir at a farm.

Syeed says he’s starting to prepare for the big Muslim holiday of Ramadan in August, and he’s already consulted with Kimelman-Block on how she has planned for Yom Kippur and Rosh Hashanah in the past.