DUBAI: US movie star Lindsay Lohan was spotted wearing a hijab while she attended events at London Modest 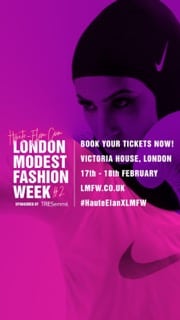 The “Mean Girls” star, who recently revealed plans to shoot a film in Saudi Arabia with an all-female cast, as well as “design” an island in Dubai, spent time talking to Saudi abaya designer Samah Khashoggi at the event.

Lohan, 31, was seen wearing a silky black hijab and also claimed to be wearing halal make-up, according to a social media post by halal make-up company Hawa Cosmetics.

“Oh my days!” the post read. “As if Lindsay Lohan came over to say hello to Team Hawa! She was so lovely and was saying how she’s into halal cosmetics and what she’s actually wearing on her face today was all halal! Well all I can say is if it’s good enough for Lindsay Lohan, (girl, what are you) all waiting for?”

The actress, who lives part-time in Dubai and also owns a nightclub in Greece, was in London to attend London Modest Fashion Week, which took place from Feb. 17-18 and saw two days of seminars, runway shows and panel discussions on modest fashion.

With collections curated to focus on less skin and body shape, the exhibited range included designs by leading names such as Amal Al-Raisi, Kiran Fathima Ayub and Till We Cover.

Front rows to the catwalk shows were solely reserved for online lifestyle and fashion bloggers who have played pivotal role in bringing modest fashion wear as a concept to Western fashion consciousness.

Fashion icon Mariah Idrissi, the world’s first Muslim woman to model in hijab for the high street retailer H&M, explained her excitement about an event like LMFW: “This is perfect time, where women come together to join the wave of women demanding they be respected and not just be sexualized.”

With faith and fashion increasingly becoming intertwined via modest fashion ranges, experts and key influencers were at hand during the two-day event to answer questions about the role of influencers in young women’s lives, entrepreneurship and even the evolution of Muslim men’s fashion trends.

This year, the event not only showcased designers from 20 countries from as far as Australia and Singapore, but also a designer of Jewish faith from the brand House of Lancry.

The event provides an opportunity for brands to meet buyers, consumers, industry experts and investors. “Many pieces from my collection sold out within two weeks of the show after which I secured a segment on Sky News and then a trial on ASOS for our brand,” said Bushra Sheikh, from the hit reality British TV series The Apprentice, who took place last year. This year also featured exciting new releases from emerging design talent.
It was not limited to luxury brands, headscarves and long robes, however. The range on display also included sporting and active-wear clothes.

In a press statement for the event, Romanna Bint-Abubaker, CEO of organizer and e-retailer Haute-Elan, said: “London Modest Fashion Week has demonstrated the power of grassroots revolution in fashion. Attendees have buying power and are expected to spend in the three-figures during the course of the two days on shopping experience.”

Given the immense success and demand for LMFW, Haute-Elan has decided to deliver the event twice a year and will return on Sept. 15 and 16 with global brands already in negotiation to sponsor this fixture.