“I want London to stand alongside Dubai as one of the great capitals of Islamic finance anywhere in the World.” It might have been difficult to imagine a British prime minister uttering that phrase 10 years ago but yesterday David Cameron delivered it to great applause at the ExCel centre, where delegates are gathering this week for the “Islamic Davos”.

It is the first time a country outside the Muslim world has hosted the World Islamic Economic Forum (WIEF), and the Government has taken the opportunity to announce its offering of Islamic bonds, or sukuk, and declare its door firmly open to business from Doha, Manama and Dubai. 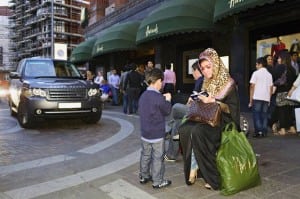 “Islamic finance is already playing a major role in shaping the economic and physical landscape of our city,” Boris Johnson wrote before the conference, citing the Qatari-financed Shard, the Malaysian-baked redevelopment of Battersea Power Station and the Olympic Village as examples of projects paid for at least in part by sharia-compliant finance.

Farmida Bi, an expert in Islamic finance at law firm Norton Rose Fulbright, says Cameron’s statement of ambition is realistic. “London has massive advantages of scale over Dubai and Kuala Lumpur [in the race to be a global Islamic financial centre],” says Bi, “and it has a reliable legal system and a vast number of professionals who can put deals together.” Bi says that the London offices of banks such as Goldman Sachs and Morgan Stanley have joined names like HSBC and Standard Chartered in having in-house sharia experts who know how to structure deals to make them compliant with Islamic rules about interest and who consult teams of “scholars”.

Cameron and Johnson both hope that hosting the WIEF will see those property deals and company takeovers multiply but London already has plenty of financial success stories among its Muslim residents and visitors. Earlier this week the Muslim Council of Britain released an assessment of the Muslim contribution to the British economy, estimating that we have more than 10,000 Muslim millionaires, with liquid assets of more than £3.6 billion. There are 13,400 Muslim-owned businesses in London, the report said, creating more than 70,000 jobs and representing just over 33 per cent of Small to Medium Enterprises in London.

There are more than 15 Muslims on this year’s Sunday Times Rich List, including tycoons of retail, hospitality and finance, but the cast of characters helping London to get Mecca-rich is much wider.

The only new entry in the 2013 Rich List, in 15th place with £4.5 billion, Al Jaber is one of the wealthiest Muslims in the world.  He made his money with hotels and property and has opened his pockets for both profit and good causes in the capital. Al Jaber is said to divide his time between Austria, where he owns the Grand Hotel and holds citizenship, his home town of Jeddah in Saudi Arabia and London, where his MBI Al Jaber Foundation has sponsored a professorship at the School of Oriental and African Studies and last year gave £1 million to support the restoration of the Grade II-listed grand hall at West-minster University.

Now the former owner of two famous west London institutions — Fulham FC and Harrods — al-Fayed’s wealth is estimated to be more than £1 billion. In his retirement the 84-year-old Egyptian still owns 65,000 acres of Scotland in the shape of his Balnagown estate and The Ritz hotel in Paris, as well as the much-derided statue of his friend Michael Jackson recently returned to him by Fulham.

His TRS brand of Asian food has been a huge success since his dad launched it in east London, and Fakhruddin now runs the business with his four brothers. It serves London’s Asian population in London and as far afield as Russia and the US with state-of-the-art manufacturing, packaging, warehousing and distribution centres in Southall and Leyton.

When fashion label Issa was overwhelmed with demand because Kate Middleton had worn one of its dresses at her engagement announcement, Mohamed al-Fayed’s 28-year-old daughter Camilla saw her chance. After buying a majority stake in the company, Issa is now expanding globally. “I’m very much taught in the University of Harrods, and what better place?” Al-Fayed told an interviewer.

Daughter of the Syrian-born finance whizz, Wafic Said, who worked at his brother’s west London kebab joint in the Sixties before making his name looking after the bank accounts of moneyed princelings from the Gulf, socialite Rasha is known for having one of the most expensive weddings of all time. Last May she married Khaled Khawaja at the Palace of Versailles. Robbie Williams played a two-hour set.

Janmohamed is best known as the author of her acclaimed 2009 novel Love in a Headscarf but as vice president of marketing agency Ogilvy Noor, she advises businesses such as Coca-Cola and Unilever on how they can appeal to Muslims. “The idea that there is a Muslim consumer is a very young idea,” she told the Standard, “but it has a real momentum.”

Head of Islamic Finance at Norton Rose Fulbright, Bi is London’s leading expert on structuring deals so they comply with the requirements of sharia law. She points out that London began making accommodations in its tax rules and regulatory framework for Islamic finance as early as 2002. “People are very comfortable using London for their transactions — there is a transparency and reliability about the system here.”

THE CLAN BUYING UP LONDON

Sheikh Hamad bin Khalifa Al Thani  is better known in these parts as “London’s Landlord”. Under his leadership, the emirate’s £50 billion sovereign wealth fund bought the Olympic Village, Harrods and Chelsea Barracks, as well as funding The Shard and One Hyde Park, in which Al Thani is said to own the most valuable triplex apartment.

His daughter Sheikha al Mayassa (whose mother is the glamorous and influential Sheikha Mozah and brother is the new Emir) is a major contributor to the London economy in her own right, a powerful figure in the world art market. Mayassa is in charge of stocking the galleries and museums of Doha with the world’s greatest artistic treasures and has an eye-watering annual budget of $1 billion. She reportedly paid Damien Hirst $20 million for his 14 bronze fetus sculptures and sponsored Hirst’s major Tate retrospective in 2012.

WHERE THEY EAT, PRAY AND PARTY

According to wealth consultancy WealthInsight, London is officially the city with the most multi-millionaires. Foreign tycoons line the capital’s coffers, among them businessmen from oil-rich Gulf states such as Qatar and Kuwait.

When it comes to shopping,  Selfridges, Harrods and Harvey Nichols are popular, particularly with wives and daughters. Harrods was bought by Qatar Holdings in 2010 for a reported £1.5 billion and its revenues (about £650 million) include spending by visitors from the UAE and Saudi Arabia. The store has an in-house booking desk for Qatar Airways and In-Q, a themed coffee shop. Outlets such as Mulberry and Burberry offer private appointments for Gulf shoppers.

“When they shop at Harrods or Selfridges they buy 10 of everything to take home,” says Karen Jones, editor of Citywealth. “Chanel and Dior are big favourites for the ladies and Phillip Lim for his loose, silky clothes. Men like Zegna and Harrys of London.” Jones estimates that visitors from the Gulf spend at least £10,000 on leisure during summer visits.

Alcohol is off the agenda but fun very much on it: evenings might start with dinner at Le Caprice, Zuma, Zaffarano, Cecconi’s, Scott’s or Aqua; later, it’s playing for big money at Knightsbridge casino Les Ambassadeurs, Crockfords in Mayfair or Colony Club. “One Saudi won £5,000 at Colony and gave it all to the receptionist at the Intercontinental,” recalls Jones. The younger crowd parties at members clubs such as Maddox.

Residents spend downtime mainly in Mayfair homes (the Mayfair Islamic Centre is nearby), although Chelsea and Marylebone are also becoming popular. Tourists opt for five-star service at the Intercontinental Park Lane, the Dorchester and the Savoy — which employs Arab-speaking staff, female butlers and offers halal menus and prayer rooms. Car parks are full of customised supercars and much has been made of the motorheads who speed up and down Park Lane.

“The idea of a quintessentially British experience, such as afternoon tea at The Ritz, is something we are often asked to arrange,” says Quintessentially’s Clementine Churchward. “Just last week one member requested 40 packs of green beans from Waitrose, which we had to ship back to his home in Jordan!”

But for many, London is home: the former Qatari prime minister reportedly intends to retire here. Many even like the rain, the litmus test of the true Londoner.