KUALA LUMPUR: Brahim’s Holdings Bhd expects its decision to venture into non-airline catering business will put it on a better footing in the next three years. 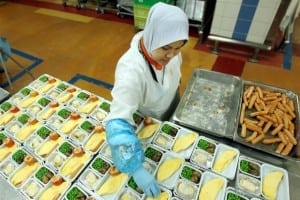 Its shareholders on Friday approved the plan to dispose of its 49% stake in Brahim’s Airline Catering Holdings Sdn Bhd, which is involved in in-flight catering service, to Singapore-based SATS Ltd for RM218mil.

Brahim’s executive chairman Datuk Seri Ibrahim Ahmad said the company would be able to reduce its dependence on airline catering business by up to 60%.

“We will carry on as best as we can and hopefully increase our in-flight catering growth,” he said after the company’s EGM on Friday.

SATS is a Singapore-based provider of gateway services and food solutions which lists Singapore Airlines, Qantas, British Airways, United Airlines and Silk Air as its customers.

Ibrahim said Brahim’s would leverage on SATS, which has 43 kitchens worldwide and a major player in the airline catering and catering businesses.

“As our strategic partner, SATS will support our intentions to explore opportunities for halal in-flight kitchen catering capabilities.

“We will tap SAT’s know-how on non-airline catering business and leverage on this core competency to venture overseas with our foreign counterparts that want to go halal,” he said, adding that Brahim’s had also signed with Mahsa College to cater to its institution.

“We are also looking at collaborations with Tabung Haji and Keretapi Tanah Melayu Bhd to increase our topline revenue in the non-airline catering business,” he said. – Bernama

“SATS is one of the major players in airline catering. They’ve got presence in 43 airline kitchens all over the world. Besides that, they have non-airline catering businesses in terms of restaurants and so on … with SATS as a partner, I think we will be able to do a much better business,” said its executive chairman Datuk Seri Ibrahim Ahmad Badawi.

“In terms of going overseas by ourselves with our flight kitchen at Sepang, we may not be able to venture outside Kuala Lumpur. Now with the 43 kitchens worldwide with SATS, we should be able to collaborate in setting up halal ventures in terms of airline catering and so on together with Singapore Airlines,” he told reporters at its EGM last Friday.

BHB is also looking at further opportunities in China, Australia and Japan by tapping into the demand for halal products in these countries.

“In Australia, one of the things we are looking at, we made an announcement last time in terms of a halal abattoir. In fact, TH expressed some interest in terms of investments in Australia. We actually will be proceeding with our halal abattoir for the production of halal meat for Malaysia and also for export to other countries.

“With the Open Skies for airline and Trans-Pacific Partnership Agreement for trading, we hope these are good opportunities for us to venture overseas, riding on the halal wave,” said Ibrahim.

He said the global halal market is 75% undersupplied and Brahim’s hopes to tap into the demand not just in terms of food but also in pharmaceuticals and related businesses by collaborating with other players in the sector.

Ibrahim said it is already in discussions with two companies overseas but declined to divulge further details.

“Hopefully, within the next couple of years or so, we would have greater presence overseas which we have not gone in a big way yet. We are still at the starting stage. So, hopefully, we will make an impact and I’m looking forward for BHB to be a major player in the halal business going forward,” he added.

In addition to the potential investment from TH in Australia, it is looking to leverage on TH’s strong presence in the Middle East, particularly Saudi Arabia.

“TH, as you all know, is very strong in the Middle East, in Saudi Arabia especially and dealing with a few hundred thousand pilgrims every year and of course there are requirements for meals, for the daily supply to hotels and so on. So we are also looking very positively at further ventures with TH,” he said.

Locally, BHB has already signed a contract with Mahsa College to provide catering at One Academy Institution and it is eyeing more opportunities in institutional catering as well as other areas such as railway catering.

Moving forward, Ibrahim said it is hopeful of 2016 being a turnaround year as there are many opportunities to expand overseas and its non-airline catering business.

The group is aiming to reduce dependency on airline catering business, which contributes some 90% of its overall revenue. Ibrahim said it aims to bring this down to 60%, with 40% revenue from non-airline business within two to three years.

“Now what we need to do is pull our act together and make full use of this relationship with SATS,” Ibrahim said.