KUALA LUMPUR 28th October 2015 (WAM) — Malaysia has called on global pharmaceutical producers to consider the country as the new regional hub to cater for the expanding global halal market. 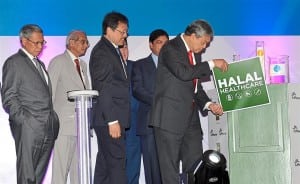 “Local industry players should double their efforts to position Malaysia at the forefront of the global healthcare and pharmaceutical industry” he said when opening the Halal Initiatives in Healthcare Industry Forum here Tuesday.

Ahmad Zahid said the global demand for halal pharmaceuticals is estimated to be worth a staggering RM349 billion (US82 billion) but the current supply is estimated at only RM8.5 million (US2 million) leaving a very big gap of RM340 million (US80 million) worth of business opportunities waiting to be explored.

“There is certainly a huge opportunity here with a very promising future and this is where Malaysia holds some of the keys. As at August this year there were already 110 Halal-certified pharmaceutical manufacturers in Malaysia including 24 export-ready manufacturers.

“Malaysia is also one of the few countries in the region that have been accepted into the Pharmaceutical Inspection Cooperation Scheme.

“This indicates that the local industry has established high manufacturing standards” he said adding this would further open up Malaysia exports to member countries of the scheme including members of the European Union Australia and Canada.

“One potential area that is ripe for exploration is herbal-based food supplements and over-the-counter medicines. With the right ingredients these products can be converted into halal products.

“There are also opportunities to capitalise on Malaysia’s diverse natural flora and fauna to develop resource-based bio-generic drugs.

“Malaysia is one of the world’s 12 most bio-diverse countries and offers high potential for sourcing active compounds for healing and wellness products” he said.

On Halal tourism Ahmad Zahid said Malaysia is the top destination and as a leader the nation could certainly complement the wider medical tourism sector especially for Muslims worldwide.