KUALA LUMPUR: There should be no attempts to cover up or protect any individuals, even VVIPs, if they are found to be tied to the activities of a meat cartel that is believed to have been passing off non-certified meat as halal meat in the country.

Umno Youth chief Datuk Dr Asyraf Wadji Dusuki said, in addition to the six recommendations made by the youth wing on the next course of action, the authorities should also disclose the names of all companies tied to the syndicate’s activities.

“This is crucial to restore the trust of the Muslim community in the halal status of imported meat in the market,” he said in a statement on his Facebook page.

Umno Youth had, on Saturday, forwarded six recommendations on how to tackle the issue, including setting up a special investigative team.

Asyraf said this was a necessary step to establish the possibility of corruption and bribery within the authorities.

“The special team should also involve agencies related to the monitoring and enforcement of halal standards, as well as the Malaysian Anti-Corruption Commission (MACC) and the police.”

Meanwhile, Datuk Seri Dr Mujahid Yusof Rawa, who is a former minister in the Prime Minister’s Department (Religious Affairs), yesterday called for a Royal Commission of Inquiry (RCI) to be set up on the issue.

Speaking at the Parti Amanah Negara convention yesterday, Mujahid, who is also party vice-president, said if the issue was not dealt with speedily, it could raise questions about the integrity and quality of the halal labels issued by the Malaysia Islamic Development Department (Jakim).

He said the issue touched on two aspects, the first being the halal status and the second on corruption, which raised larger questions on national security.

“The doubts over this have raised the spectre of this cartel, which has dominated the market for a long time.

“This involves a more cancerous issue pertaining to national security, bribery and abuse of the halal label.

“The authorities, namely MACC, should investigate all agencies involved including Jakim, the Domestic Trade and Consumer Affairs Ministry, Customs Department, and even the Agriculture and Food Industries Ministry.

“An RCI should be set up to investigate the alleged porous nature of our borders and the integrity of Jakim’s halal label, as well as expose the network involved,” he said.

Mujahid said failure to tackle this issue effectively would lead to questions over Jakim’s credibility, and a spillover effect on Malaysia’s status as one of the world’s largest halal hubs.

“The value of the halal industry in Malaysia is US$147 billion, while the projected value of the global halal market in 2023 is US$6.9 trillion.

“It is not only Jakim’s credibility which is at stake here, but also other agencies, such as the Malaysian Quarantine and Inspection Services Department and port police.”

KUALA LUMPUR: The Domestic Trade and Consumer Affairs Ministry has acknowledged that the investigation into local companies linked to the activities of a meat cartel will take a long time.

Minister Datuk Seri Alexander Nanta Linggi said the investigation was complex as it required the involvement of numerous agencies, such as the Veterinary Services Department and the Malaysia Islamic Development Department (Jakim).

“This issue concerns not just the ministry. Our scope of authority revolves only around the use of fake halal labels as well as consumer-related acts.

“Our investigation can only involve what falls under our scope of power. I cannot speak on behalf of other agencies and their respective investigations.

“However, we are not moving alone on this. We are cooperating with other agencies because this is necessary in order to resolve this issue,” he told Berita Harian.

Prior to this, the ministry had confirmed that it was investigating Malaysian companies linked to the cartel for offences under trademark laws.

Nanta Linggi said at the same time, the ministry could not rush any aspect of its investigation. The probe, he said, must be done carefully to ensure that the offender was brought to justice.

“We cannot rush as the issues are complex. Let us and the other agencies do a detailed investigation. If we rush (in prosecuting the companies), it could have other legal implications.” 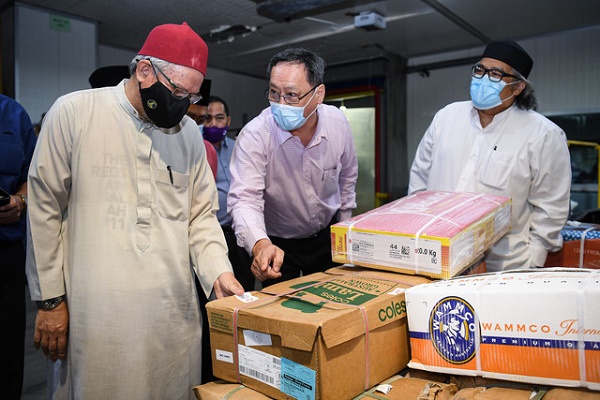 Kuala Lumpur: The government is committed to addressing the issue on imported frozen meat bearing fake halal logos as soon as possible, including considering the setting up of a Royal Commission of Inquiry (RCI).

Minister in the Prime Minister’s Department (Religious Affairs) Datuk Seri Dr Zulkifli Mohamad Al-Bakri said discussions have started and will continue until the issue is resolved.

“We will discuss with Jakim (Department of Islamic Development Malaysia), Halal Jakim and several ministries to see where the weaknesses are for us to fix.

“I promise immediate action will be taken within Jakim’s standards and jurisdiction,” he told reporters after inspecting a centre for imported frozen meat, Lucky Frozen Sdn Bhd, here today

On the setting up of the RCI, Zulkifli had asked to be given time to discuss it first.

“We need to do an in-depth study. But it will not take long, two or three days or a week for us to see the response and information on the things that we can tackle immediately,” he said.

The media reported that a meat cartel was believed to be involved in smuggling non-certified meat from China, Ukraine, Brazil and Argentina before repackaging them with fake halal labels at a warehouse in Senai, Johor.