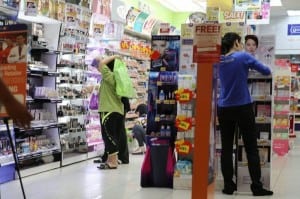 PETALING JAYA, Aug 9 ? Unable to find “halal” products to bathe her baby eight years ago, Famiza Zulkifli turned to making her own soap, but little did she know that was the beginning of what would become a burgeoning RM4 million-a-year business.

It also turns out that Famiza was far from alone. As more and more Muslim women in Malaysia and across the world seek out beauty products that conform to Islamic principles, the “halal” cosmetics market here has expanded by leaps and bounds.

In 2010, the industry exported RM1.3 billion in products to the rest of the world; two years later, it rose to RM1.73 billion, according to the “halal” Industry Development Corporation (HDC).

“Our prayers, our acts of worship, are accepted by God,” Famiza told The Malay Mail Online in a recent phone interview.

“That’s the reason why Muslim women opt for ‘halal’. It’s a religious obligation,” added the 41-year-old singer-turned-entrepreneur, whose company called Muslimah Manufacturing Sdn Bhd is based in Sungai Petani, Kedah.

In Islam, “halal” means permissible according to its laws. Its opposite, “haram”, signifies that which is forbidden.

“Halal” cosmetics ? which include lipstick, skincare and personal care products, and alcohol-free perfume ? do not contain ingredients from “haram” animals like pigs, or derivatives from other animals that are not slaughtered according to Quranic procedures.

HDC told The Malay Mail Online in an email interview recently that Malaysia’s “halal” cosmetics exports totalled RM464.5 million in the first quarter of the year, up from RM322 million in the same period last year.

“In 2011, there were 114 local companies certified ‘halal’ and a total of 3,493 ‘halal’ cosmetics and personal care products, including colour cosmetics, hygiene products for skin, hair and oral, baby products and perfumes,” said HDC.

Halal cosmetics include alcohol-free perfumes. HDC noted that even some non-Muslim women buy “halal” makeup because of the “purity”, “safety and quality” of such religious-compliant products.

Global “halal” sales ? including cosmetics, food and pharmaceuticals ? total about RM6.8 trillion a year, according to The Edge.

The global “halal” cosmetics market itself ranges between US$5 billion (RM16 billion) and US$14 billion in sales annually and is expanding at a rate of about 20 per cent every year, international advertising company JWT MENA (Middle East and North Africa) was quoted as saying by UK business daily Financial Times last month.

Minister in charge of Islamic affairs Datuk Seri Jamil Khir Baharom was reported as saying by news portal Borneo Insider last January that Malaysia was on track towards becoming the global “halal” hub following recognition of the country on “halal” certification.

The Malaysian Islamic Development Department (Jakim) said recently that it has issued 395 “halal” certificates for cosmetic companies till this year.

“Halal” certification for cosmetics is seen to be increasing, especially with the existence of a “halal” standard for such products, which is the MS 2200:2008,” Jakim told The Malay Mail Online recently via email.

“This standard is not just for cosmetics, but also for personal care products,” it added.

Famiza said she has expanded her business from soap to skincare, shampoo, deodorants, and even household products like fabric softener.

“How sure are you that the animal was slaughtered according to shariah?” she asked.

“So, we try to avoid animals completely. All our products are vegetarian,” added the businesswoman, who usually wears a black niqab that reveals only her eyes.

“‘Halal’ to us is more of what’s inside it. When you want to pray, you can’t have anything that’s non-halal on you,” she said.

While 60 per cent of Famiza’s products are sold locally, she also exports to neighbouring countries like Indonesia, Thailand, Cambodia, Singapore, and even Mauritius in Africa.