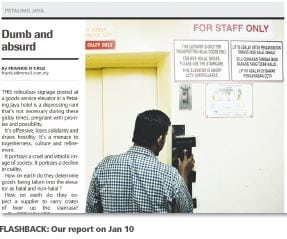 WE wish to address an issue that has caught the attention of concerned Malaysians regarding hotels applying for or renewing their halal certification with Jakim or their corresponding state religious departments.

Upon receiving this notice, the Malaysian Association of Hotels (MAH) with the relevant authorities rationalise matters and clarify the current procedures that MAH members practise to comply with conditions to attain their halal certification.

In the meantime, the media and public alike have voiced dissatisfaction and confusion recently regarding an issue involving signboards that were placed at elevators on three floor levels of a fourstar hotel in Petaling Jaya which were exclusively intended for suppliers who deliver goods to the hotel, informing them that the lifts were for transporting ‘halal’ goods only.

The hotel concerned is in the process of renewing their halal certification but has faced challenges due to their having a Chinese restaurant in the hotel.

“The signboards at the entrance to the elevators in the hotel in Petaling Jaya are not meant to discriminate but were placed with the intent to meet halal requirements.

The hotel’s sole purpose is to renew their halal certification in compliance with the authorities’ advice and suggestions.