Crystal Crown’s chief operating officer reveals that the signboards were put up to comply with the regulations set by the Malaysian Department of Islamic Development (Jakim). 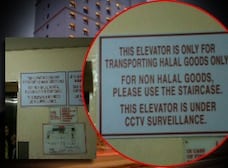 PETALING JAYA: The controversial signboards beside three elevators at the Crystal Crown hotel here were put up to comply with the requirements stipulated by the Department of Islamic Development (Jakim) regarding the transportation of non-halal food.

Crystal Crown’s chief operating officer Khoo Hui Keam said: “Our ‘halal’ licence expired last June and Jakim had new requirements which stated that we [Crystal Crown] could not renew it because we had a Chinese eatery within the hotel which served pork.”

She added that the hotel management tried speaking to the Chinese eatery to stop serving food which contained pork.

“The owner of the restaurant turned back at us and said: ‘If you guys want us to stop serving pork, it is as good enough as asking us to leave’,” she told FMT.

However, Khoo said that the management was reluctant to vacate the Chinese eatery as they had been long-serving customers of the hotel and were good “pay masters” for rental.

The Selangor Islamic Religious Department (Jais) got involved as well, according to Khoo, and they offered to appeal for the hotel to get its certification renewed if they separated the passage through which “halal” and “non-halal” food were transported.

Crystal Crown’s management decided to go ahead with the JAIS’ recommendation and the signboards at levels B1, B2, and B3 were erected to notify food suppliers that only “halal” food could be transported using those elevators.

FMT understands that food suppliers to the Chinese restaurant have to use the staircase to transport their “non-halal” goods.

Asked if there was any monitoring of the goods that go in the lifts, Khoo said: “There are security personnel at all three floors and the lifts have video surveillance as well.”

Referring to the signboards, Khoo added that both Jais and Jakim visited the hotel premises last week and were not pleased.

“They said that it [signboards] were ‘too high’ and wanted them lowered to eye-level. They also complained that the signboards are not striking enough,” she said.

Due to their complaints, Khoo said a new sign was to be put up soon with a brighter colour so suppliers were well aware that only “halal” goods could pass through the lifts.

FMT discovered that 20% to 30% of the hotel’s patrons were from government bodies and if Crystal Crown was to lose its halal certification, it would lose all the customers from this
target group.

Quizzed whether other hotels were practising the same, Khoo said many do not because their licence was still valid and not up for renewal.

“Once their licence has lapsed, then they will have to comply with Jakim and Jais’ requirements if they are to keep their certificate,” she added.