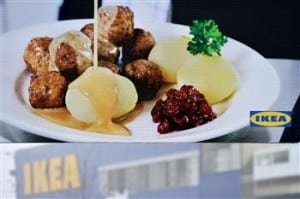 Ikea Food Market and Ikea restaurant have temporarily stopped selling meatballs while they do DNA testing on them. After the recent controversy in Europe where horse meat was found in beef products they have taken extra caution to make sure that it has not affected their products in Malaysia.

‘Meatballs sold in Ikea Malaysia contain only beef from Australia’, said store manager, Roszalena Mashurdin. ‘None of our ingredients are produced by affected suppliers’, she said. ‘We do not tolerate any other ingredients than the ones stipulated in our recipes or specifications, secured through set standards, certifications and product analysis by accredited laboratories.’

Rozalena said that they hope to have the test results back next week to confirm that there are no indications of horse meat in the meatballs.

She said that the meatballs are Halal certified and produced in Malaysia.

STOCKHOLM – The producer of Ikea meatballs withdrawn from shelves in Thailand and two dozen other countries has found horsemeat in its products, the national food agency SLA said Wednesday.

The Swedish national food agency says it has found horsemeat in meatballs labelled as beef-and-pork products, and sold at the Bang Na Mega Mall.

The agency was informed by Swedish company Dafgaard that its own tests had “confirmed the presence of equine DNA”, a spokeswoman for the agency said.

The Swedish furniture giant said Tuesday it had pulled one-kilogramme bags of frozen meatballs off its shelves at the Bang Na Mega Mall, and in 24 other countries. In Thailand, the meatballs were available in frozen, one-kilo packets to take home, and in a meal served at the Ikea food court for 185 baht.

Dafgaard announced on Tuesday that it had found no horsemeat in 320 of its products it tested, but said it had not yet received results from tests on the meat in which Czech food safety authorities found equine DNA.

It was unclear whether the positive results announced Wednesday came from the same batch of meat tested in the Czech Republic.

Ikea was also expecting its own test results on the meatballs to be completed on Wednesday.

Swedish news agency TT reported the level of horsemeat found was between one and 10 per cent, which is higher than the level usually considered to be the result of contamination in a slaughterhouse.

Ikea was the latest group to become caught up in a Europe-wide scandal over horsemeat in food products that erupted in January when horse DNA was detected in beefburgers in Britain and Ireland.

Dubai: Ikea UAE said it is sending a batch of meat products for tests in Abu Dhabi as an “extra-precautionary” step to further confirm there is no horsemeat in beef meatballs being served to customers visiting its stores in the UAE.

The move follows Ikea’s recent recall of meatballs from sale in 14 European countries after checks in the Czech Republic revealed horsemeat traces in a batch produced in Sweden.

An Ikea official in the furniture giant’s home country of Sweden earlier told Gulf News that the developments in Europe had no bearing on the UAE.

In a statement on Thursday, Ikea UAE added: “The trust of our customers is of utmost importance to us, which is why last week we have taken extra-precautionary measures by sending a batch for DNA laboratory testing in Abu Dhabi. We expect test results next week to confirm that there are no indications of any ingredients than the ones stipulated in our recipes and specifications.”

Meatballs served at Ikea’s UAE stores are halal certified and imported from Saudi Arabia, not Europe, the statement said. The company claimed the meatballs are produced under licence by “a highly reputable company” in Saudi Arabia called Premier Foods Industries.

The meat used in the Saudi Arabian production is sourced from “accredited halal suppliers” in Australia — not from the same source as the packaged meatballs from the Swedish.

Ikea UAE said it takes “utmost care to ensure that the meatballs are prepared in a halal manner and therefore does not follow the Swedish recipe. The situation in Europe does not affect meatballs sold at Ikea UAE. Ikea is committed to serving and selling high-quality food that is safe, healthy and produced with care for the environment and the people who produce it. We do not tolerate any other ingredients than the ones stipulated in our recipes or specifications, secured through set standards, certifications and product analysis by accreditedlaboratories.”

Meatballs were being served on Tuesday at the Dubai Ikea store where employees assured one customer that the meat was prepared according to halal standards, with halal frozen cooked meatballs from Saudi Arabia also sold.

A growing number of companies have been affected by the horsemeat scandal in Europe, with similar developments reported in South Africa more recently.