PUTRAJAYA, July 8 (Bernama) — Poland hopes to cooperate with Malaysia to penetrate the country’s halal industry in line with the latter’s inspiration to become a Halal hub in this region. 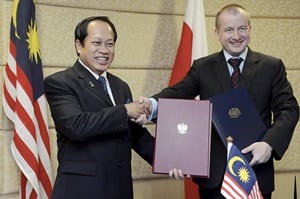 Ambassador of Poland to Malaysia, Adam Jelonek said Poland was among a few European countries that have been granted the halal certificate by the Malaysian authority two years ago.

He said this to reporters after a signing ceremony between Malaysia and Poland for the avoidance of double taxation and the prevention of fiscal evasion with respect to taxes on income (DTAA) in Putrajaya, Monday.

Jelonek said the Mufti of Poland had visited Malaysia recently and had discussions with the Malaysia Department of Islamic Development (JAKIM) in relation to the halal products.

“JAKIM officers had also been to Poland a few times and we hope to have a conference with JAKIM in relation to the halal industry for the benefit of both countries in the future,” he added.

He said the country hoped the cooperation with Malaysia would not only be in terms of export and import, but also for direct investment.

“We are now in the midst of discussions with the state government of Sarawak in relation to the chemical industry,” Jelonek said.

Meanwhile, Ahmad said from January to April this year, the total bilateral trade between Malaysia and Poland reached RM681.8 million, an increase of 44.2 per cent compared with RM472.9 million in the same period last year.

“Exports to Poland amounted to RM263.4 million while imports from Poland reached RM418.4 million,” he said, adding that trade balance between January and April 2013 was in favour of Poland, for the first time, at RM155 million.

For total trade last year, Ahmad said despite the European economic crisis the total bilateral trade increased by 10.7 per cent to RM1.437 billion from RM1.298 billion in 2011.

In this regard, he said there was potential for Malaysia to increase trade with Poland as the latter was able to sustain its economic growth of 4.3 per cent and 2.0 per cent in 2011 and 2012, respectively.