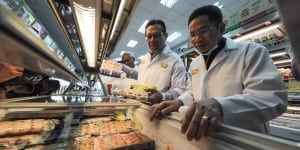 Ramli Food Industries, a subsidiary of Ramly Group, is investing RM1 billion in a new processing facility to boost its export market capacity.

“For starters, three production lines will be set up with an investment of RM320 million and this will triple the capacity of the current factory.”

Ramly Group today signed a syndicated financial deal with Agro Bank and Bank Pembangunan worth RM274 million to fund the first phase of the complex, which will be built at the Halal Hub Industrial Park at Pulau Indah, Klang.

The second phase of the complex would be the construction of a storage depot of six acres with an investment of RM100 million, where as the third phase would be the addition of a training centre, research and development centre and food processing plant as wide as two acres.

The third phase will see an investment of RM300 million to RM400 million.

“The construction at Pulau Indah has already commenced. With the first phase we have three (production) lines. One line’s capacity is five tonnes so we will later be able to produce 15 tonnes,” said Ramly..

He expressed hope that the first phase, when completed, will triple the firm’s profit of RM80 million charted last year.